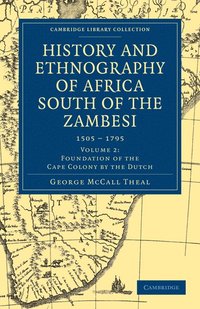 History and Ethnography of Africa South of the Zambesi, from the Settlement of the Portuguese at Sofala in September 1505 to the Conquest of the Cape Colony by the British in September 1795

av George Mccall Theal
Häftad Engelska, 2010-12-02
429
Köp
Spara som favorit
Finns även som
Visa alla 2 format & utgåvor
George McCall Theal (1837-1919) was a prolific South African historian and civil servant. After working as a missionary between 1875-1880 he was appointed magistrate of Tamacha before taking a position as a clerk in the government and became Keeper of the Cape Colony Archives. He was appointed Colonial Historiographer in 1891. These volumes, first published in 1907, contain Theal's detailed history of South Africa between 1505-1795. Theal discusses the formation of the colony from the first Portuguese conquests, exploring the Dutch colonial establishment and administration. Theal also describes the societies of the various indigenous peoples of South Africa and their relations with the colonists. These volumes provide valuable details on the administration of the Dutch colony, and reveal contemporary attitudes to the ideas of history and colonisation. These volumes are reissued from the expanded 1910 edition. Volume 2 covers the years 1652-1745.
Visa hela texten