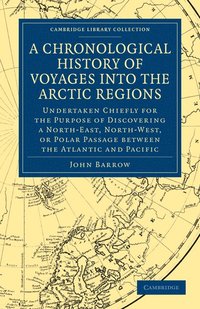 A Chronological History of Voyages into the Arctic Regions

Undertaken Chiefly for the Purpose of Discovering a North-East, North-West, or Polar Passage between the Atlantic and Pacific

av John Barrow
Häftad Engelska, 2011-05-09
449
Köp
Spara som favorit
Finns även som
Visa alla 4 format & utgåvor
Sir John Barrow (1764-1848), a founder and early president of the Royal Geographical Society, served as Second Secretary to the Admiralty for forty years. He was responsible for promoting polar exploration, and published two books on the subject for general readers, both now reissued in the Cambridge Library Collection. This, the earlier of the two, appeared in 1818 and is a chronological account of Arctic voyages from the Viking period to the early nineteenth century, and of the intensifying search for a northern route between the Atlantic and the Pacific. Barrow covers the expeditions of European explorers including Cabot, Frobisher, Barentz, Hudson and Baffin. He quotes extracts from their journals to create a vivid picture of the extreme conditions experienced by the explorers, their battles against cold, disease and starvation, their impressions of the plentiful Arctic wildlife, and both friendly and hostile encounters with the Inuit.
Visa hela texten