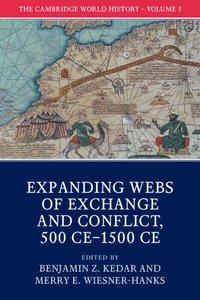 av Benjamin Z Kedar
Häftad Engelska, 2017-11-09
349
Köp
Spara som favorit
Skickas inom 10-15 vardagar.
Fri frakt inom Sverige för privatpersoner.
Finns även som
Visa alla 1 format & utgåvor
Volume 5 of the Cambridge World History series uncovers the cross-cultural exchange and conquest, and the accompanying growth of regional and trans-regional states, religions, and economic systems, during the period 500 to 1500 CE. The volume begins by outlining a series of core issues and processes across the world, including human relations with nature, gender and family, social hierarchies, education, and warfare. Further essays examine maritime and land-based networks of long-distance trade and migration in agricultural and nomadic societies, and the transmission and exchange of cultural forms, scientific knowledge, technologies, and text-based religious systems that accompanied these. The final section surveys the development of centralized regional states and empires in both the eastern and western hemispheres. Together these essays by an international team of leading authors show how processes furthering cultural, commercial, and political integration within and between various regions of the world made this millennium a 'proto-global' era.
Visa hela texten

Benjamin Z. Kedar, Professor Emeritus of History at the Hebrew University of Jerusalem, is a leading historian of the crusades and the Frankish Kingdom of Jerusalem, and the founding editor of the journal Crusades. He has employed varieties of the comparative approach in his Merchants in Crisis (1976), Crusade and Mission (1984), and in numerous articles. He has also proposed to use series of aerial photographs of the same area, shot at different points in time, as reliable sources for the history of Palestine/Israel from 1917 onward. Kedar served as president of the Society for the Study of the Crusades and the Latin East and chaired the board of the Israel Antiquities Authority, and is currently vice-president of the Israel Academy of Sciences and Humanities. He is a corresponding member of the Medieval Academy of America and of the Monumenta Germaniae Historica (Munich). Merry E. Wiesner-Hanks is a Distinguished Professor and Chair of the History Department at the University of Wisconsin, Milwaukee. She began her scholarly career as a historian of early modern Europe, with a particular focus on women and gender, and remains a leader in that field, serving as the president of three scholarly societies and since 1996 as the Senior Editor of the Sixteenth Century Journal. Since 2000 she has also moved into world and global history, and now serves as one of the editors of the Journal of Global History. She is the author or editor of twenty books and many articles that have appeared in English, German, Italian, Spanish, French, Greek, Chinese, Turkish, and Korean. These include Early Modern Europe 1450-1789, 2nd edition (Cambridge, 2013), Women and Gender in Early Modern Europe, 3rd edition (Cambridge, 2008), Christianity and Sexuality in the Early Modern World: Regulating Desire, Reforming Practice, 2nd edition (2010) and Gender in History: Global Perspectives, 2nd edition (2010). Her research has been supported by grants from the Fulbright and Guggenheim Foundations, among others.