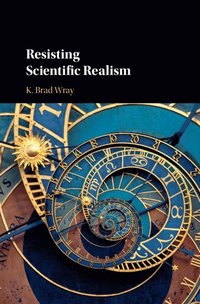 av K Brad Wray
Inbunden Engelska, 2018-11-01
839
Köp
Spara som favorit
Skickas inom 10-15 vardagar.
Fri frakt inom Sverige för privatpersoner.
In this book K. Brad Wray provides a comprehensive survey of the arguments against scientific realism. In addition to presenting logical considerations that undermine the realists' inferences to the likely truth or approximate truth of our theories, he provides a thorough assessment of the evidence from the history of science. He also examines grounds for a defence of anti-realism, including an anti-realist explanation for the success of our current theories, an account of why false theories can be empirically successful, and an explanation for why we should expect radical changes of theory in the future. His arguments are supported and illustrated by cases from the history of science, including a sustained study of the Copernican Revolution, and a study of the revolution in early twentieth century chemistry, when chemists came to classify elements by their atomic number rather than by their atomic weight.
Visa hela texten

'With its insightful and engaging critique Resisting Scientific Realism takes on every argument that scientific realists have offered, but does much more than that. What emerges along the way is a strengthened anti-realism skillfully aligned with epistemic modesty about the continuing historical development of the sciences. It will be a delightful and rewarding read for realists and anti-realists alike.' Bas Van Fraassen, Princeton University, New Jersey

'Resisting Scientific Realism is a wonderfully rich, impressively clear, and meticulously argued, thought-provoking book ... it is required reading for anyone interested in the contemporary development of the scientific realism debate in the philosophy of science literature.' Philosophia

'Resisting Scientific Realism exhibits excellent scholarship and philosophical creativity. It is a valuable contribution to the literature on scientific anti-realism, containing important arguments with which realists must contend, and directing the scientific realism debate towards exciting new (or unfairly neglected) topics. The writing is admirably clear and elegant. If you are interested in scientific anti-realism or scientific theory change, you should read this book.' British Journal for the Philosophy of Science

Introduction; Part I. Against Realism: 1. The Copernican Revolution in astronomy; 2. The underdetermination of theory choice by evidence; 3. The argument from underconsideration; 4. Epistemic privilege: another realist dogma; 5. Four pessimistic inductions; 6. Pessimism, optimism, and the exponential growth of science; 7. The nature of radical theory change; 8. Do the theoretical values really support scientific realism?; Part II. Strengthening Anti-Realism: 9. But can the anti-realist explain the success of science?; 10. Selection and predictive success; 11. How are false theories able to make true predictions?; 12. Discarded theories: the role of changing interests; 13. A synthesis.