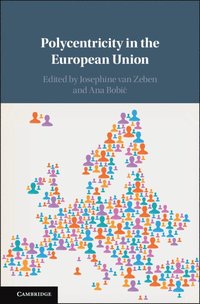 Polycentricity in the European Union

av Josephine Van Zeben
Inbunden Engelska, 2019-04-11
919
Köp
Spara som favorit
Finns även som
Visa alla 2 format & utgåvor
Supranational governance is being challenged by politicians and citizens around the EU as over-centralized and undemocratic. This book is premised on the idea that polycentric governance, developed by Vincent and Elinor Ostrom, is a fruitful place to start for addressing this challenge. Assessing the presence of, and potential for, polycentric governance within the EU means approaching established principles and practices from a new perspective. While the debate on these issues is rich, longstanding and interdisciplinary, it has proven difficult to sidestep the 'renationalisation/federalisation' dichotomy. The aim of this volume is not to reject the EU's institutional structure but provide a different benchmark for the assessment of its functioning. Polycentric theory highlights the importance of multilevel horizontal relationships within the EU - between states, but also between many sub-state actors, all the way down to individuals. This helps us answer the question: how do we achieve self-governance in an interdependent world?
Visa hela texten

Josephine van Zeben is a Fellow at Worcester College and Tutor in EU and Public Law. In 2013, she was a postdoctoral researcher at the Vincent and Elinor Ostrom Workshop in Political Theory and Policy Analysis. Dr van Zeben holds a degree in Social Sciences from Utrecht University, as well as law degrees from the University of Edinburgh, the University of Amsterdam and Harvard Law School. She has also been a Lecturer at the ETH Zurich since 2012. Her research focuses on how pluricentric systems - such as the EU - can best be structured to address complex regulatory problems. Ana Bobi is a Postdoctoral Researcher at the LEVIATHAN Project at the Hertie School of Governance, Berlin. She works on questions of accountability in EU economic governance, with a focus on the role of judicial and constitutional review. At the Faculty of Law, University of Oxford, she completed the D.Phil. as a Graduate Assistance Fund Scholar and the M.Jur. as the OSI/University of Oxford scholar. She previously obtained B.A. LL.M. summa cum laude at the Faculty of Law, University of Zagreb, Croatia in 2011. Ana was also a lecturer in Constitutional and Administrative Law at Keble College, University of Oxford.