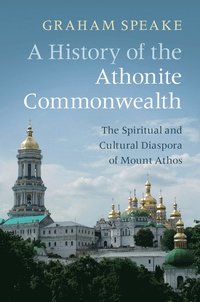 A History of the Athonite Commonwealth

The Spiritual and Cultural Diaspora of Mount Athos

av Graham Speake
Inbunden Engelska, 2018-06-07
789
Köp
Spara som favorit
Skickas inom 7-10 vardagar.
Gratis frakt inom Sverige över 159 kr för privatpersoner.
Finns även som
Visa alla 3 format & utgåvor
This book examines the part played by monks of Mount Athos in the diffusion of Orthodox monasticism throughout Eastern Europe and beyond. It focuses on the lives of outstanding holy men in the history of Orthodoxy who have been drawn to the Mountain, have absorbed the spirit of its wisdom and its prayer, and have returned to the outside world, inspired to spread the results of their labours and learning. In a remarkable demonstration of what may be termed 'soft power' in action, these men have carried the image of Athos to all corners of the Balkan peninsula, to Ukraine, to the very far north of Russia, across Siberia and the Bering Strait into North America, and most recently (when traditional routes were closed to them by the curtain of communism) to the West. Their dynamic witness is the greatest gift of Athos to a world thirsting for spiritual guidance.
Visa hela texten

'Dr Speake's earlier volume Mount Athos: Renewal in Paradise has quickly come to be recognised as the best book on the subject. Its sequel,A History of the Athonite Commonwealth, has the same good qualities: clear, based closely on the sources, scholarly yet readable. It breaks new ground, and is an important addition to our knowledge of the Holy Mountain.' Metropolitan Kallistos of Diokleia, Pembroke College, Oxford

'In this intriguing and important book Graham Speake shows how from their beginning with St Athanasios in the tenth century the influence of the monks and monasteries of Mount Athos has spread far afield and continues today. It is a fascinating account that shows just why Athos matters so much.' Dame Averil Cameron, Professor Emerita of Late Antique and Byzantine History and Warden of Keble College, University of Oxford

'The monastic communities on Mount Athos play a central role in Orthodox Christianity. Graham Speake, who has already written a superb account of their millennium-long history on the peninsula, now demonstrates in a way that has never been done before how Athonite monasticism in its various forms has been intimately involved in the history of Orthodoxy worldwide. This is a unique and compelling book.' Reverend Andrew Louth, Emeritus Professor of Patristic and Byzantine Studies, University of Durham

'Its very unfamiliarity makes Graham Speake's survey of the spiritual diaspora of Mount Athos a surprising window on the faith that East and West are meant to share.' Christopher Howse, The Daily Telegraph

'It is a book that takes the reader across to many different places and earthly nations. We see how in each of these the seeds of a common vision of the spiritual life as expressed through Athonite monasticism were planted and have borne fruit through the lives of manifold saints.' Nicholas Chapman, Orthodox Life

'This new book provides an astonishing and rich panorama of the many ways in which monastic life on Mount Athos has influenced Christian life across the Orthodox world for more than 1000 years. The book is highly readable, and it is also very well illustrated ... This is an outstanding book in every way, and a most valuable contribution not only to church history, but also to a fuller understanding of Orthodox Christianity around the world today.' Douglas Dales, Church Times

'Before us is a well-conceived, methodologically consistent, and highly readable work which irrevocably ranks its author among the leading authorities on Mount Athos in the West today.' Vladeta Jankovi, Friends of Mount Athos Annual Report 2018

Graham Speake is founder and Chairman of the Friends of Mount Athos. He is a regular visitor to the Mountain and was received into the Orthodox Church there in 1999. Trained as a classicist, he holds a doctorate in Greek from the University of Oxford and is a Fellow of the Society of Antiquaries. His first book, Mount Athos: Renewal in Paradise (2nd edition, 2014), was awarded the Criticos Prize.