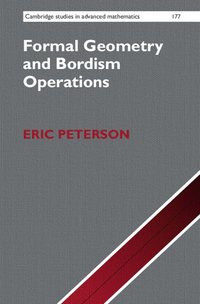 av Eric Peterson
Inbunden Engelska, 2018-12-06
659
Köp
Spara som favorit
Skickas inom 7-10 vardagar.
Gratis frakt inom Sverige över 159 kr för privatpersoner.
Finns även som
Visa alla 1 format & utgåvor
This text organizes a range of results in chromatic homotopy theory, running a single thread through theorems in bordism and a detailed understanding of the moduli of formal groups. It emphasizes the naturally occurring algebro-geometric models that presage the topological results, taking the reader through a pedagogical development of the field. In addition to forming the backbone of the stable homotopy category, these ideas have found application in other fields: the daughter subject 'elliptic cohomology' abuts mathematical physics, manifold geometry, topological analysis, and the representation theory of loop groups. The common language employed when discussing these subjects showcases their unity and guides the reader breezily from one domain to the next, ultimately culminating in the construction of Witten's genus for String manifolds. This text is an expansion of a set of lecture notes for a topics course delivered at Harvard University during the spring term of 2016.
Visa hela texten

'It has a down-to-earth and inviting style (no small achievement in a book about functorial algebraic geometry). It is elegant, precise, and incisive, and it is strong on both theory and calculation.' Michael Berg, MAA Reviews

'This book is likely to be quite useful to graduate students in algebraic topology. For years it has been an informal tradition for students of algebraic topology to teach themselves enough of the foundations of algebraic geometry to be able to translate between theorems about Hopf algebroids and theorems about algebraic stacks, and then to proceed to translate, as much as possible, calculations and theorems in algebraic topology into equivalent formulations in terms of moduli stacks of formal groups and related objects. This book does a great service to such students (and their advisors!), as it gives good answers to many of the questions such students inevitably ask.' Andrew Salch, MatSciNet

Eric Peterson works in quantum compilation for near-term supremacy hardware at Rigetti Computing in Berkeley, California. He was previously a Benjamin Peirce Fellow at Harvard University.