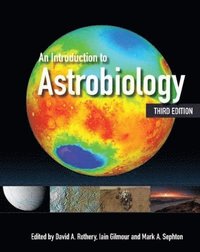 An Introduction to Astrobiology

av David A Rothery
Häftad Engelska, 2018-03-31
489
Köp
Spara som favorit
Skickas inom 10-15 vardagar.
Fri frakt inom Sverige för privatpersoner.
Finns även som
Visa alla 1 format & utgåvor
How did life on Earth begin? How common is it elsewhere in the Universe? Written and edited by planetary scientists and astrobiologists, this undergraduate-level textbook provides an introduction to the origin and nature of life, the habitable environments in our solar system and the techniques most successfully used for discovery and characterisation of exoplanets. This third edition has been thoroughly revised to embrace the latest developments in this field. Updated topics include the origins of water on Earth, the exploration of habitable environments on Mars, Europa and Enceladus, and the burgeoning discoveries in exoplanetary systems. Ideal for introductory courses on the subject, the textbook is also well-suited for self-study. It highlights important concepts and techniques in boxed summaries, with questions and exercises throughout the text, with full solutions provided. Online resources, hosted at www.cambridge.org/features/planets, include selected figures from the book, self-assessment questions and sample tutor assignments.
Visa hela texten

Bloggat om An Introduction to Astrobiology

David A. Rothery is a volcanologist and planetary scientist at The Open University, with a background in geological remote sensing and a special fascination for the satellites of the outer planets. He has been involved in several space missions, and leads the Surface and Composition Working Group for the European Space Agency's BepiColombo mission to Mercury. Iain Gilmour is Professor of Isotope Geochemistry at The Open University, where he undertakes research on the geochemistry of past climate change and large scale planetary impacts. He has taught on a wide range of Open University Science modules in the geosciences and planetary sciences as well as delivering courses at other institutions. Mark A. Sephton is Professor of Organic Geochemistry and Meteoritics and Head of the Department of Earth Science and Engineering at Imperial College London. His research interests focus on organic records on Earth and in space.