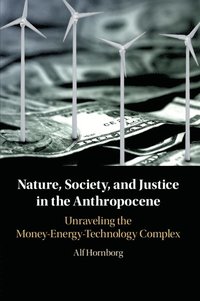 Nature, Society, and Justice in the Anthropocene

av Alf Hornborg
Häftad Engelska, 2021-05-13
309
Köp
Spara som favorit
Finns även som
Visa alla 3 format & utgåvor
Are money and technology the core illusions of our time? In this book, Alf Hornborg offers a fresh assessment of the inequalities and environmental degradation of the world. He shows how both mainstream and radical economists are limited by a particular worldview and, as a result, do not grasp that conventional money is at the root of many of the problems that are threatening societies, not to mention planet Earth itself. Hornborg demonstrates how market prices obscure asymmetric exchanges of resources - human labor, land, energy, materials - under a veil of fictive reciprocity. Such unequal exchange, he claims, underpins the phenomenon of technological development, which is, fundamentally, a redistribution of time and space - human labor and land - in world society. Hornborg deftly illustrates how money and technology have shaped our thinking and our social and ecological relations, with disturbing consequences. He also offers solutions for their redesign in ways that will promote justice and sustainability.
Visa hela texten

'Have you ever wondered just what is the ultimate driving force behind the Anthropocene, the proposed new epoch in Earth history? It's our love of money. This book unravels the complex, profound force of money, not only to structure a global economy but also to destabilise the climate system and drive the Earth's biosphere towards its sixth great extinction event. Alf Hornborg's latest book is a must-read for anyone who wants to understand not only how a feature of everyday life that we all take for granted has the power to disrupt the functioning of an entire planet, but what we can do about it.' Will Steffen, Former executive director of the International Geosphere-Biosphere Programme (IGBP), Kbenhavns Universitet and author of Global Change and the Earth System: A Planet under Pressure

'Alf Hornborg's magnum opus is a bracing challenge to the two main streams of progressive critique of capitalism and the ecological crisis: the Marxist and the posthumanist. Both are going to have to engage seriously with Hornborg's argument, the essence of which is that power resides in the artifacts that rule our lives and that these artifacts - money and technology - are human constructions. Radical social change, including an adequate response to the unfolding catastrophe of the Anthropocene, requires that humans redesign those artifacts. It's a powerful, thought-provoking argument. If it's right it points to a new direction out of the self-destructive impasse in which humanity finds itself.' Clive Hamilton, Charles Sturt University and author of Growth Fetish, Affluenza, Requiem for a Species, Earthmasters: Playing God with the Climate and Defiant Earth: The Fate of Humans in the Anthropocene

'Exploding illusions about the neutrality of technology, this innovative work centers on the role of money and technology in obscuring the fundamental inequalities in the flow of ecological resources that underpin capitalism and the global economic order. It should prove essential reading for all those seeking clarity on the injustice and environmental calamities of our times. Defending science and analytic rigour even as it gives an ear to their posthumanist critics; drawing on Marxism and Actor-Network Theory even as it quarrels with them, Hornborg invites us to think beyond conventional political understandings and their familiar categories.In exploring the confusions and evasions of current thinking on the nature-society divide, he opens up questions about value, progress, and the quest for wealth that are never asked by mainstream economists, and seldom even by their critics.' Kate Soper, London Metropolitan University; author of What Is Nature?: Culture, Politics and the Non-Human

'Alf Hornborg's Nature, Society and Justice in the Anthropocene throws down the gauntlet.The Anthropocene, he argues, exposes two of industrial capitalism's founding principles consolidated at the historical zenith of the British Empire.First, that economics is...

Alf Hornborg is an anthropologist and the Professor of Human Ecology at Lunds Universitet, Sweden. He is the author of The Power of the Machine (2001), Global Ecology and Unequal Exchange (2011), and Global Magic (2016). He has conducted field research in Canada, Peru, and Brazil.

1. Rethinking economy and technology; 2. The Anthropocene challenge to our worldview; 3. Producing and obscuring global injustices; 4. The money game; 5. Anticipating degrowth; 6. The ontology of technology; 7. Energy technologies as time-space appropriation; 8. Capitalism, energy and the logic of money; 9. Unequal exchange and economic value; 10. Subjects versus objects: artifacts have consequences, not agency; 11. Anthropocene confusions: dithering while the planet burns; 12. Animism, relationism and the ontological turn; 13. Conclusions and possibilities; Afterword: confronting mainstream notions of progress.