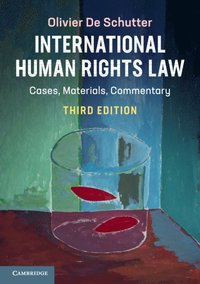 av Olivier De Schutter
Häftad Engelska, 2019-09-12
489
Köp
Spara som favorit
Skickas inom 10-15 vardagar.
Fri frakt inom Sverige för privatpersoner.
Finns även som
Visa alla 8 format & utgåvor
International human rights law has expanded remarkably since the 1990s. It is therefore more important than ever to identify, beyond specific controversies, its deeper structure and the general pattern of evolution. Moreover, it has a logic of its own: though part of international law, it borrows many of its principles from domestic constitutional law. This leading textbook meets both challenges. It has been significantly updated for the new third edition, introducing sections on subjects including business and human rights, amongst other key areas. Features include forty new cases from various jurisdictions or expert bodies, and figures offering visual descriptions of the procedures discussed in the text. The 'questions for discussion' have also been systematically updated. The text retains its student-friendly design, and the features which made the previous editions so engaging and accessible remain. This popular textbook continues to be an essential tool for all students of human rights law.
Visa hela texten

'Well structured and well written, I would be more than willing to recommend this book as compulsory reading for my students ' Caroline Fournet, University of Exeter"

Olivier De Schutter is Professor at Universit Catholique de Louvain, Belgium and at SciencesPo. He was the United Nations Special Rapporteur on the right to food between 2008 and 2014 and is currently a member of the Committee on Economic, Social and Cultural Rights (2015-22). A Member of the Global Law School Faculty at New York University, he has been Visiting Professor at a number of institutions, most recently at Columbia University, New York and at Yale University, Connecticut. He has published widely on European and international human rights law, with a specific focus on the relationship between governance and human rights and on economic globalization and human rights. In 2013, he was awarded the prestigious Francqui Prize in the social sciences and humanities, and in 2017 became the first non-American to be awarded the Leadership award of the James Beard Foundation.