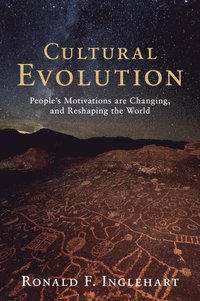 People's Motivations are Changing, and Reshaping the World

av Ronald F Inglehart
(1 röst)
Häftad Engelska, 2019-04-04
292
Köp
Spara som favorit
Finns även som
Visa alla 3 format & utgåvor
Cultural Evolution argues that people's values and behavior are shaped by the degree to which survival is secure; it was precarious for most of history, which encouraged heavy emphasis on group solidarity, rejection of outsiders, and obedience to strong leaders. For under extreme scarcity, xenophobia is realistic: if there is just enough land to support one tribe and another tribe tries to claim it, survival may literally be a choice between Us and Them. Conversely, high levels of existential security encourage openness to change, diversity, and new ideas. The unprecedented prosperity and security of the postwar era brought cultural change, the environmentalist movement, and the spread of democracy. But in recent decades, diminishing job security and rising inequality have led to an authoritarian reaction. Evidence from more than 100 countries demonstrates that people's motivations and behavior reflect the extent to which they take survival for granted - and that modernization changes them in roughly predictable ways. This book explains the rise of environmentalist parties, gender equality, and same-sex marriage through a new, empirically-tested version of modernization theory.
Visa hela texten

'This book is the product of an extremely ambitious project - ambitious in terms of the broad scope of the various aspects of society that its theoretical insights purport to explain, but also in terms of the range of the social science disciplines that are swept up and integrated into this 'Evolutionary Modernization theory'. One could even regard this enterprise as striving towards what would be the equivalent of 'unified field theory' in physics. What Chutzpah! And what a burden of proof such an ambitious enterprise would face. Remarkably, Inglehart succeeds in this demanding task, the ultimate product of which I regard as one of the most important works in the social sciences in decades.' Richard Gunther, Ohio State University

'Cultural Evolution culminates a remarkably productive half-century's exploration of cultural change by Ronald F. Inglehart. This renowned scholar now extends the reach of his theory to global history, while honing his concepts to dissect, for example, the emergence of right-wing populism and LGBTQ activism. This is Inglehart at his most ambitious and most astute. It is a powerful book.' Robert D. Putnam, Harvard University, Massachusetts

'Cultural Evolution is an intellectual tour-de-force. Drawing on insights from years of research in societies representing ninety percent of the world's population, the renowned political scientist Ronald F. Inglehart traces the most important changes taking place across the globe - the shift from Materialist to Postmaterialist values. His brilliant new Evolutionary Modernization theory explains changes in religion, conflict, gender equality, democracy, happiness, among other phenomena, through the same parsimonious scientific lens. It is a fantastic read for anyone interested in understanding the dynamics of culture change.' Michele Gelfand, University of Maryland

'This timely book will certainly become one of the most significant books of the first part of this century - every library should have a copy.' J. S. Taylor, Choice

'Inglehart is one of the last great postwar exponents of modernization theory, which sees economic development as leading to shifts in society toward liberal democracy.' G. John Ikenberry, Foreign Affairs

'Cultural Evolution may be one of the three greatest books ever written in the category 'Optimistic Accounts of Change in Public Opinion.' ... Life may generally be short, harsh, and exploitive, but the values transitions documented by Inglehart suggest that there are viable avenues for social improvement.' Samuel Cohn, American Journal of Sociology

'Inglehart seeks to reach beyond the scholarly audience. To do so, he eschews presenting the daunting array of statistical estimates that are the norm for such analyses. Instead, the extensive evidence is presented through well crafted figures that are self-sufficient in conveying the hypothesis at hand, the array of nations being examined, and the results obtained. Further...

Ronald F. Inglehart is the Lowenstein Professor of Political Science at the University of Michigan, Ann Arbor. He holds honorary doctorates from Uppsala University, Sweden; the Free University of Brussels, Belgium; and the University of Lueneburg, Germany. Inglehart helped found the Euro-Barometer surveys and is founding president of the World Values Survey Association, which has surveyed representative national samples of the publics of 105 countries containing over ninety percent of the world's population. He is a fellow of the American Academy of Arts and Sciences, and of the American Academy of Political and Social Science. In 2011, he won the Johan Skytte prize in Political Science, often considered the highest prize awarded in the field.

Introduction: overview of this book; 1. Evolutionary modernization and cultural change; 2. The rise of postmaterialist values in the West and the World; 3. Global cultural patterns; 4. The end of secularization?; 5. Cultural change, slow and fast: the distinctive trajectory of norms governing gender equality and sexual orientation; 6. The feminization of society and declining willingness to fight for one's country: the individual-level component of the long peace; 7. Development and democracy; 8. The changing roots of happiness; 9. The silent revolution in reverse: the rise of Trump and the authoritarian populist parties; 10. The coming of artificial intelligence society.