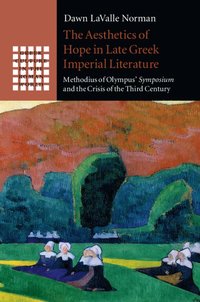 The Aesthetics of Hope in Late Greek Imperial Literature

Methodius of Olympus' Symposium and the Crisis of the Third Century

av Dawn Lavalle Norman
Inbunden Engelska, 2019-12-05
819
Köp
Spara som favorit
Skickas inom 7-10 vardagar.
Gratis frakt inom Sverige över 159 kr för privatpersoner.
Finns även som
Visa alla 2 format & utgåvor
This book sheds light on a relatively dark period of literary history, the late third century CE, a period that falls between the Second Sophistic and Late Antiquity. It argues that more was being written during this time than past scholars have realized and takes as its prime example the understudied Christian writer Methodius of Olympus. Among his many works, this book focuses on his dialogic Symposium, a text which exposes an era's new concern to re-orient the gaze of a generation from the past onto the future. Dr LaValle Norman makes the further argument that scholarship on the Imperial period that does not include Christian writers within its purview misses the richness of this period, which was one of deepening interaction between Christian and non-Christian writers. Only through recovering this conversation can we understand the transitional period that led to the rise of Constantine.
Visa hela texten

Dawn LaValle Norman is a Research Fellow at the Australian Catholic University's Institute for Religion and Critical Inquiry.

Introduction. Christians among Imperial Greek writers in the third century; 1. Mapping third-century literature from the Severans to Constantine; 2. The end of dialogue? The Christianization of a tradition; 3. Compilation and unity in Imperial sympotic traditions; 4. Rhetoric and the problem of rivalry; 5. The lyric tradition and changing hymnic forms; Conclusion.