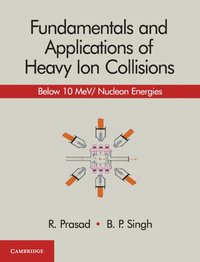 R. Prasad is an Emeritus Professor of Physics at the Aligarh Muslim University, India, where he has served for forty-three years. During that time, he was Lecturer, Reader, and Professor of Experimental Physics, as well as Chairman of the Department of Physics and Dean of the Faculty of Science. He has taught courses on nuclear physics, thermal physics, electronics, quantum mechanics and modern physics at graduate and postgraduate level. His area of specialization is experimental nuclear physics and he has published more than 175 papers in national and international journals. Prasad carried out postdoctoral research at the University of Hamburg, Germany as DAAD fellow, at the Swiss Institute of Nuclear Research (SIN) Switzerland as visiting professor, at the Atom Institute of Technical University of Vienna, Austria as invited guest professor, at the Abduls Salam International Centre for Theoretical Physics (ICTP) Triest, Italy, and at the Variable Energy Cyclotron Centre (VECC), India. He is author of a book titled Classical and Quantum Thermal Physics (Cambridge, 2016). B. P. Singh is Professor of Physics at Aligarh Muslim University. His areas of research include experimental nuclear physics with special interest on the topics of pre-equilibrium emission in nuclear reactions and incomplete fusion reactions in heavy ion interaction. He has more than twenty-two years of teaching and research experience and has taught courses on nuclear physics, heavy-ion physics, mechanics, electricity and magnetism, thermal and statistical physics at undergraduate and graduate level.