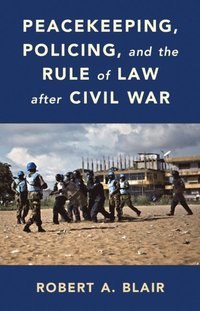 Peacekeeping, Policing, and the Rule of Law after Civil War

av Robert A Blair
Häftad Engelska, 2020-11-05
300
Köp
Spara som favorit
Skickas inom 7-10 vardagar.
Gratis frakt inom Sverige över 159 kr för privatpersoner.
Finns även som
Visa alla 2 format & utgåvor
The rule of law is indispensable for sustained peace, good governance, and economic growth, especially in countries recovering from civil war. Yet despite its importance, we know surprisingly little about how to restore the rule of law in the wake of conflict. In this book, Robert A. Blair proposes a new theory to explain how the international community can help establish the rule of law in the world's weakest and most war-torn states, focusing on the crucial but often underappreciated role of the United Nations. Blair tests the theory by drawing on original household surveys in Liberia, highly disaggregated data on UN personnel and activities across Africa, and hundreds of interviews with UN officials, local leaders, citizens, and government and civil society representatives. The book demonstrates that UN intervention can have a deeper, more lasting, and more positive effect on the rule of law than skeptics typically believe.
Visa hela texten

'This path-breaking first book charts a new path for research on United Nations (UN) peacebuilding. Blair provides new thinking and new evidence on how UN peace operations can help build self-enforcing peace after civil war by restoring the rule of law, managing competition between formal and informal sources of power, and rebuilding - or in some cases building for the first time - the state's relationship with its citizens. This is a landmark study that will change the field.' Nicholas Sambanis, Presidential Distinguished Professor of Political Science, University of Pennsylvania

'Peacekeeping, Policing, and the Rule of Law after Civil War represents an extraordinary piece of research. Robert Blair conducted 15 months of fieldwork (mainly in Liberia), fielded multiple surveys, and constructed several new datasets to produce this work. He demonstrates that UN peacekeepers have encouraged many positive institutional reforms across African countries, including greater constitutional constraints and judicial independence, and improved security and justice institutions. A must-read for scholars and practitioners interested in peacekeeping.' Lise Morj Howard, Professor of Government, Georgetown University, and author of Power in Peacekeeping

'Professor Blair's analysis provides both a realistic and a hopeful assessment of how UN peace operations can bolster the rule of law in the aftermath of civil war. By unpacking what is happening at the 'macro', 'micro', and 'meso' levels, Blair provides a theoretical framework that will be used by scholars studying and practitioners doing peacebuilding, political development, and conflict resolution for years to come.' Kyle Beardsley, Professor of Political Science, Duke University

Robert A. Blair is Assistant Professor of Political Science and International and Public Affairs at Brown University, Rhode Island. His research focuses on post-conflict reconstruction and reform. He has published widely on these topics and has worked in various capacities for the UN Office of Rule of Law and Security Institutions, the Political Instability Task Force, and the US Agency for International Development.