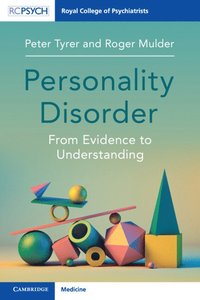 From Evidence to Understanding

av Peter Tyrer
Häftad Engelska, 2022-02-24
349
Köp
Spara som favorit
Kan tyvärr inte levereras innan julafton.
Finns även som
Visa alla 2 format & utgåvor
Personality disorder affects more than 10% of the population but is widely ignored by health professionals as it is viewed as a term of stigma. The new classification of personality disorder in the ICD-11 shows that we are all on a spectrum of personality disturbance and that this can change over time. This important new book explains why all health professionals need to be aware of personality disorders in their clinical practice. Abnormal personality, at all levels of severity, should be taken into account when choosing treatment, when predicting outcomes, when anticipating relapse, and when explaining diagnosis. Authored by leading experts in this field, this book explains how the new classification of personality disorders in the ICD-11 helps to select treatment programmes, plan long-term management and avoid adverse consequences in the treatment of this patient group.
Visa hela texten

Peter Tyrer is Emeritus Professor of Community Psychiatry, Imperial College, London and Consultant in Transformation Psychiatry, Lincolnshire Partnership NHS Foundation Trust, UK. He is a Fellow and Honorary Fellow of the Royal College of Psychiatrists and a Fellow of the Academy of Medical Sciences. He received the Lifetime Achievement Award of the Royal College in 2015. Roger Mulder is a Professor of Psychiatry at the University of Otago, Christchurch, New Zealand. He is a fellow of the Royal Australian and New Zealand College of Psychiatrists. He has been awarded the College Senior Research Award and the Gold Medal for Research Excellence by the University of Otago. He is Co-editor in Chief of Personality and Mental Health and Co-chair of the World Psychiatric Association Section on Personality Disorders.