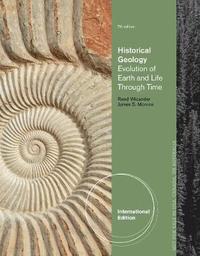 Evolution of Earth and Life Through Time

James S. Monroe is Professor Emeritus of Geology at Central Michigan University, where he taught Physical Geology, Historical Geology, Prehistoric Life, and Stratigraphy and Sedimentology beginning in 1975 and served as chair of the Geology department. He received his Ph.D. from the University of Montana. He has coauthored several textbooks with Reed Wicander and has interests in Cenozoic geology and geologic education. Monroe now lives in Chico, California, where he remains active in geology by teaching courses to a large group of retirees. Reed Wicander is a geology professor at Central Michigan University, where he teaches Physical Geology, Historical Geology, Prehistoric Life, and Invertebrate Paleontology and was previously chair of the department. He obtained his B.A. at San Diego State University and his Ph.D. at UCLA. His main research interests involve various aspects of Paleozoic palynology, specifically the study of acritarchs, on which he has published numerous papers. He is a past president of the American Association of Stratigraphic Palynologists and currently a councilor of the International Federation of Palynological Societies and chair of the Acritarch Subcommission of the Commission Internationale de Microflore du Paleozoique. He has coauthored several geology textbooks with James S. Monroe.