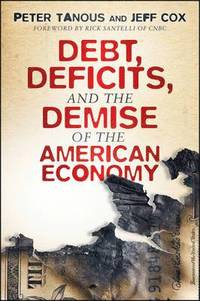 Debt, Deficits, and the Demise of the American Economy

av Peter J Tanous, Jeff Cox
Inbunden Engelska, 2011-05-20
339
Köp
Spara som favorit
Finns även som
Visa alla 2 format & utgåvor
What investors can do to protect their investments in the next phase of the ongoing global economic collapse The United States is heading toward an unavoidable financial catastrophe that will paralyze the markets and the overall economy in ways never before seen. Some call this impending economic catastrophe a double-dip recession, others a financial Armageddon. Regardless of what it's called, it is too late to stop it. Debts, Deficits, and the Demise of the American Economy is a look at how we got here, how the crisis is unfolding, and how it will end with a stock market crash in 2012, if not sooner. * Takes you through the unraveling of the collapse, starting with a wave of sovereign debt defaults in Europe * Predicts a stock market decline of two to three thousand points, a run on banks resulting in a major bank crisis, and rampant inflation * Provides investment strategies, including alternative investments such as timber, farm land, and oil * Offers a detailed proposal to get the United States out of the crisis Debts, Deficits, and the Demise of the American Economy is a must-read, play-by-play account of the worldwide depression that is likely to unfold in the coming years.
Visa hela texten

Peter Tanous is President of Lepercq Lynx Investment Advisory. Over the course of his forty years as a finance professional, he has served as executive vice president of Bank Audi (U.S.A.) in New York City, chairman of Petra Capital Corporation an international investment bank that he cofounded and first vice president and international regional director with Smith Barney. Mr. Tanous is the author of several critically acclaimed books, including Investment Gurus, which was chosen as a Main Selection of The Money Book Club, as was his subsequent book, The Wealth Equation. Jeff Cox has been a journalist since 1987 and is a staff writer with CNBC.com where he covers all aspects of the markets, and appears on CNBC Television. He provides market commentary for radio stations across the country, and his articles frequently run on other CNBC syndication partners such as TheStreet.com, Yahoo!, and AOL Money. He also has worked at CNN Money and as a senior editor for two Pennsylvania newspapers. Cox's writing and editing projects have been honored on multiple occasions by the New Jersey Press Association and Pennsylvania Newspaper Association.

Foreword. Introduction. Chapter 1 It's the Deficit, Stupid. Chapter 2 The Crisis Begins. Chapter 3 The Miserable State of the States. Chapter 4 Inflation, Through the Years. Chapter 5 Europe on the Brink. Chapter 6 The Crisis Hits the United States. Chapter 7 The Way Back. Chapter 8 Forging Ahead. Chapter 9 Investing in a Time of Crisis. Chapter 10 Gold Still Good. Chapter 11 The World Still Runs on Oil. Chapter 12 Understanding the Investment Risks We Face. Conclusion We Have Been Here Before. Notes. Acknowledgments. About the Authors. Index.