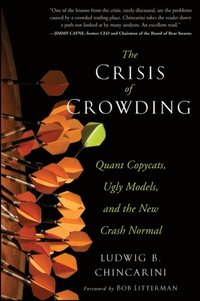 av Ludwig B Chincarini
E-bok (PDF - DRM), Engelska, 2012-09-07
309
Ladda ned
Spara som favorit
Laddas ned direkt
Läs i vår app för iPhone, iPad och Android
Finns även som
Visa alla 2 format & utgåvor
A rare analytical look at the financial crisis using simple analysis The economic crisis that began in 2008 revealed the numerous problems in our financial system, from the way mortgage loans were produced to the way Wall Street banks leveraged themselves. Curiously enough, however, most of the reasons for the banking collapse are very similar to the reasons that Long-Term Capital Management (LTCM), the largest hedge fund to date, collapsed in 1998. The Crisis of Crowding looks at LTCM in greater detail, with new information, for a more accurate perspective, examining how the subsequent hedge funds started by Meriwether and former partners were destroyed again by the lapse of judgement in allowing Lehman Brothers to fail. Covering the lessons that were ignored during LTCM's collapse but eventually connected to the financial crisis of 2008, the book presents a series of lessons for hedge funds and financial markets, including touching upon the circle of greed from homeowners to real estate agents to politicians to Wall Street. Guides the reader through the real story of Long-Term Capital Management with accurate descriptions, previously unpublished data, and interviews Describes the lessons that hedge funds, as well as the market, should have learned from LTCM's collapse Explores how the financial crisis and LTCM are a global phenomena rooted in failures to account for risk in crowded spaces with leverage Explains why quantitative finance is essential for every financial institution from risk management to valuation modeling to algorithmic trading Is filled with simple quantitative analysis about the financial crisis, from the Quant Crisis of 2007 to the failure of Lehman Brothers to the Flash Crash of 2010 A unique blend of storytelling and sound quantitative analysis, The Crisis of Crowding is one of the first books to offer an analytical look at the financial crisis rather than just an account of what happened. Also included are a layman's guide to the Dodd-Frank rules and what it means for the future, as well as an evaluation of the Fed's reaction to the crisis, QE1, QE2, and QE3.
Visa hela texten