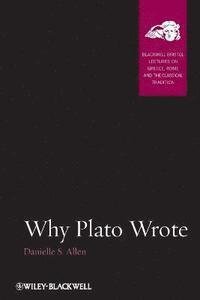 Packed with controversial theses, engagingly and intelligently written, iconoclastic there s not much wrong with this book as a work of ancient philosophy. ( The Heythrop Journal, 4 September 2013) "In her bold and richly absorbing study, Why Plato Wrote, Danielle S. Allen argues that the answer to why Plato wrote is also the answer to the relation between the Platonic dialogues and Athenian political life ... He may have elected not to enter the political fray in Athens as ordinarily understood, but Danielle Allen shows with elegance and scholarship that he was indeed a politicos, just as Diogenes Laertius claimed." (Times Literary Supplement, 23 December 2011) "I have learned much from this book. It demands that we connect Plato's writing to real life in his city. Even those who do not share all its conclusions will be challenged by Allen's many original insights into how Plato used symbols to work on our intellect, our preconceptual beliefs, and our emotions." (Bryn Mawr Classical Review, 21 November 2011) "This extraordinary and scholarly book takes a fascinating new look at Plato as politikos. It is a joy to read. Excellent notes, bibliography, and index. Summing Up: Essential. Upper-level undergraduates through faculty/researchers." (Choice, 1 June 2011)

Danielle S. Allen is UPS Foundation Professor at the Institute for Advanced Study at Princeton. She is the author of The World of Prometheus: The Politics of Punishing in Democratic Athens (2000) and Talking to Strangers: Anxieties of Citizenship Since Brown vs. the Board of Education (2004).

Acknowledgments ix Abbreviations xi Prologue: Why Think about Plato? 1 Part I: Why Plato Wrote 9 Chapter 1: Who Was Plato? 11 Chapter 2: The Importance of Symbols in Human Life 24 Chapter 3: The Philosopher as Model-Maker 38 Chapter 4: The Philosopher as Shadow-Maker 55 Chapter 5: What Plato Wrote 70 Chapter 6: How Plato Lived 79 Part II: What Plato Did 87 Chapter 7: The Case for Influence 89 Chapter 8: Culture War Emergent 108 Chapter 9: Culture War Concluded 122 Epilogue: And to My Colleagues 143 Appendix 1: The Relationship between Paradigms and Forms 148 Appendix 2: A Second Tri-partite Division of the Soul? 154 Appendix 3: Miso- Compounds in Greek Literature 158 Notes 161 References 206 Further Reading 215 Index 219