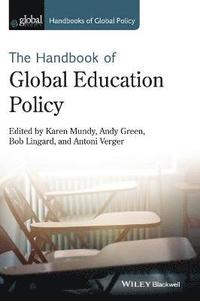 Karen Mundy is a Professor, Associate Dean of Research, and Canada Research Chair at the Ontario Institute for Studies in Education of the University of Toronto, where she directs the Comparative, International and Development Education Centre (CIDEC). Her research has focuses on the global politics of education for all programs and policies, education reform in sub-Saharan Africa, the role of civil society in the reform of educational systems, and the policy influence of international organizations, such as the World Bank, UNESCO and the WTO. A former president of the Comparative International Education Society, Dr. Mundy has published five books and more than four dozen articles and book chapters, and is a contributor to dozens of policy papers and reports. Andy Green is Professor of Comparative Social Science at UCL Institute of Education and Director of the ESRC Centre for Learning and Life Chances. A frequent consultant to international bodies, such as CEDEFOP, the European Commission, OECD and UNESCO, and to the UK government departments, Dr. Green has published eighteen books, including: Education, Globalization and the Nation State (1997); Regimes of Social Cohesion: Societies and the Crisis of Globalization (2014, with J.G. Janmaat) and Education and State Formation: Europe, East Asia and the USA (2013). He was elected an Academician of the UK Academy of Social Science in 2010. Bob Lingard is a Professorial Research Fellow in the School of Education at the University of Queensland, Australia. A Fellow of the Australian Academy of Social Sciences and Editor of the journal Discourse: Studies in the Cultural Politics of Education, Dr. Lingard has published twenty books, including most recently Globalizing Educational Policy (2010) (with Fazal Rizvi), Politics, Policies and Pedagogies in Education: The Selected Works of Bob Lingard (2014) and Globalizing Educational Accountabilities (2015) (with Wayne Martino, Goli Rezai-Rashti and Sam Sellar). He has also published more than one hundred journal articles and book chapters in the sociology of education. Antoni Verger is a Senior Researcher in the Department of Sociology at the Universitat Autonoma de Barcelona. A former post-doctoral researcher at the Amsterdam Institute for Social Science Research of the University of Amsterdam, Dr. Verger research specializes on two main areas: the global governance of education and education privatization policies. He has published more than four dozen articles, book chapters and books on these themes, including WTO/GATS and the Global Politics of Higher Education (Routledge, 2010), and Global Education Policy and International Development: New Agendas, Issues and Programmes (Bloosmbury, 2012).