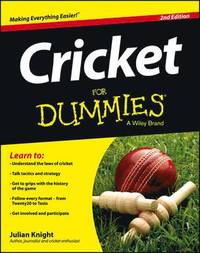 av Julian Knight
Häftad Engelska, 2013-04-19
239
Köp
Spara som favorit
Skickas inom 5-8 vardagar.
Fri frakt inom Sverige för privatpersoner.
Finns även som
Visa alla 3 format & utgåvor
A complete guide to cricket for players and fans alike Whether you're a budding player or aspiring armchair expert, Cricket For Dummies helps you get to grips with this fascinating sport. Completely revised and updated for the first back-to-back Ashes series in 38 years, this hands-on guide gives you clear explanations of the cricket's laws, step-by-step explanations of techniques and tactics, and exciting coverage of the tournaments, global rivalries, and great players. * Fully revised and updated to chronicle the rise of twenty20 cricket and the IPL, the implementation of DRS, and the changing face of the game * Covers cricket basics the pitch, the laws, the equipment and more * Provides an in-depth look at cricket formats * Offers a guide to building cricket skills bowling, batting, and fielding * Includes coverage of the best players and the biggest tournaments throughout the world Complete with Top Ten Lists of the greatest cricketers, the most memorable cricket matches, and the biggest controversies, Cricket For Dummies is your one-stop resource on this popular sport.
Visa hela texten

Julian Knight is a journalist currently working as an editor at the Independent on Sunday. He was a reporter at BBC News, contributing to the BBC News website and Radio Five Live. A former youth coach and captain at Blackheath Cricket Club, he has played for several clubs in London and the north-west of England.