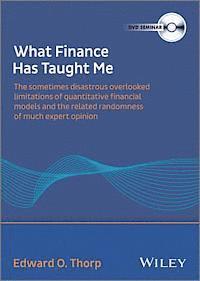 What Finance Has Taught Me

av Edward O Thorp
(1 röst)  |  Läs 1 recension
DVD Engelska, 2014-03-10
379
Köp
Spara som favorit
Skickas inom 7-10 vardagar.
Gratis frakt inom Sverige över 159 kr för privatpersoner.
Run Time: 51.08 minutes Quant legend Ed Thorp shares several unifying concepts that have helped his thinking over the last five decades in finance: - ?The map is not the territory? highlights the repeatedly and sometimes disastrous overlooked limitations of quantitative financial models. - The related randomness, even folly, of much expert opinion and the difference between ?hedgehogs? and foxes? tells us that if it?s important, verify the facts and then think for yourself in forming your own opinion. - When the invisible hand becomes a visible foot in the mouth, the tragedy of the commons, and the proper pricing of externalities are repeatedly overlooked. Critical for long term investors: The secular pricing of securities, even the fate of empire, is largely determined by the aggregate behavior of the politically connected rich, those among the 0.01% who use government to extract excess wealth (rents) from everyone else. This video, one of six from the Wiley WILMOTT Summit on Risk and Quantitative Modeling in Finance, held on the 11th December 2012 at Columbia University, New York feature the presentations from thought leaders and industry experts aiming to draw together some of the lessons of the last decade in order to restate the discipline?s fundamental role in driving the future success of the global market economy. This is the time to define what quantitative finance really means beyond the fallout of the global financial crisis and to identify the technology and techniques that will power innovation and growth. Videos in this series include: Paul Wilmott - Recent Advances in Stupid Ideas in Quant Finance Kent Osband - Fooled by Rational Turbulence Aaron Brown - And The Cows That Were Ugly and Gaunt Ate Up The Seven Sleek, Fat Cows Patrick S. Hagan - On Beyond Black: Volatility Surfaces and Dark Noise Edward O. Thorp - What Finance Has Taught Me Chaired by Jack Schwager ? Wiley Wilmott Summit Debate, Is Finance the sickness or the cure? Joined by Paul Wilmott, Kent Osband, Aaron Brown and Patrick S. Hagan
Visa hela texten

Edward O. Thorp, Author and Hedge Fund Manager, and blackjack player best known as the "father of wearable computer" after inventing the world's first wearable computer in 1961.He was a pioneer in modern applications of probability theory, including the harnessing of very small correlations for reliable financial gain. He was the author of Beat the Dealer, the first book to mathematically prove, in 1962, that the house advantage in blackjack could be overcome by card counting. He also developed and applied effective hedge fund techniques in the financial markets, and collaborated with Claude Shannon in creating the first wearable computer. Thorp received his Ph.D. from the University of California, Los Angeles in 1958, and worked at M.I.T. from 1959 to 1961. He was a professor of mathematics from 1961-1965 at New Mexico State University, and then joined the University of California, Irvine where he was a professor of mathematics from 1965 to 1977 and a professor of mathematics and finance from 1977 to 1982.