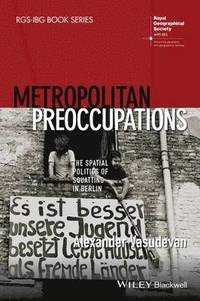 The Spatial Politics of Squatting in Berlin

av Alexander Vasudevan
Häftad Engelska, 2015-10-09
289
Köp
Spara som favorit
Finns även som
Visa alla 3 format & utgåvor
In this, the first book-length study of the cultural and political geography of squatting in Berlin, Alexander Vasudevan links the everyday practices of squatters in the city to wider and enduring questions about the relationship between space, culture, and protest. * Focuses on the everyday and makeshift practices of squatters in their attempt to exist beyond dominant power relations and redefine what it means to live in the city * Offers a fresh critical perspective that builds on recent debates about the right to the city and the role of grassroots activism in the making of alternative urbanisms * Examines the implications of urban squatting for how we think, research and inhabit the city as a site of radical social transformation * Challenges existing scholarship on the New Left in Germany by developing a critical geographical reading of the anti-authoritarian revolt and the complex geographies of connection and solidarity that emerged in its wake * Draws on extensive field work conducted in Berlin and elsewhere in Germany
Visa hela texten

'This important, thoughtful and thought-provoking text sets out to develop a radical spatial history of squatting in Berlin. Unapologetically and powerfully committed to exploring the ways the city itself may be thought of as a radical political project, Vasudevan sympathetically but honestly reflects on some of the challenges of sustaining a radical urban politics of squatting over time. Metropolitan Preoccupations is a genuinely innovative contribution to geographical scholarship, opening up ways of thinking about the radical politics of the city.' Allan Cochrane, Emeritus Professor of Urban Studies, Open University, UK 'In this deftly-told spatial history of squatting in Berlin, Alexander Vasudevan argues in compelling detail that radical social movements are inseparable from concrete forms of geography- and city-making. Anchored in a grounded and gripping narrative of the practices and struggles through which squatters have co-constituted Berlin as an intense site of urban experimentation and protest, Metropolitan Preoccupations simultaneously lends new historical depth and global connectivity to our understanding of 21st-century "right-to-the-city" movements. It is difficult to imagine a story that more effectively excavates the fundamental importance and the multi-layered meanings of the basic geographical right to be somewhere.' Matthew Hannah, Professor of Cultural Geography, Universitat Bayreuth, Germany

Alexander Vasudevan is Assistant Professor of Cultural and Historical Geography at the University of Nottingham, UK. A co-editor of Practicing the Archive: Reflections on Method and Practice in Historical Geography (with E. Gagen and H. Lorimer, 2007) his work has been published in several prestigious journals, including Antipode, Cultural Geographies, Environment and Planning A and D, Progress in Human Geography, and Social and Cultural Geography. His current research focuses on radical politics, urban squatting and the wider geographies of contemporary precarity.