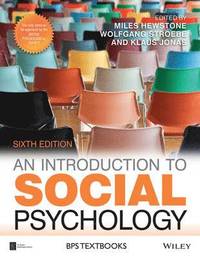 An Introduction to Social Psychology

av Miles Hewstone, Wolfgang Stroebe, Klaus Jonas
Häftad Engelska, 2015-04-24
659
Köp
Spara som favorit
Fåtal ex i lager. Skickas inom 1-2 vardagar.
Fri frakt inom Sverige för privatpersoner.
Finns även som
Visa alla 2 format & utgåvor
For over 25 years An Introduction to Social Psychology has been combining traditional academic rigor with a contemporary level of cohesion, accessibility, pedagogy and instructor support to provide a definitive guide to the engaging and ever-evolving field of social psychology. This sixth edition, completely revised and updated to reflect current issues and underlying theory in the field, has been specially designed to meet the needs of students at all levels, with contributions written by leading psychologists, each an acknowledged expert in the topics covered in a given chapter. The text benefits hugely from an updated range of innovative pedagogical features intended to catch the imagination, combined with a rigorous editorial approach, which results in a cohesive and uniform style accessible to all. Each chapter addresses both major themes and key studies, showing how the relevant field of research has developed over time and linking classic and contemporary perspectives.
Visa hela texten

Miles Hewstone is Professor of Social Psychology at the University of Oxford. His current work centres on the reduction of intergroup conflict via intergroup contact, stereotype change, and crossed categorization. Professor Hewstone is a former editor of the British Journal of Social Psychology and co-founding editor of the European Review of Social Psychology. He has also been the recipient of numerous prizes including the Spearman Medal (1987) and the Presidents' Award for Distinguished Contributions to Psychological Knowledge (2001), from the British Psychological Society. He has authored and edited several books, including Psychology (2005, Blackwell) and Minority Influence and Innovation (2010, Taylor and Francis). Wolfgang Stroebe has taught social psychology at universities in the USA, UK, Germany and The Netherlands and is now Professor at Utrecht University and the University of Groningen, both in the Netherlands. He is editor with Miles Hewstone of the European Review of Social Psychology. He has authored and co-authored eight books and more than a hundred scientific articles and chapters on topics of social and health psychology. He is Fellow of a great number of international associations and has received numerous awards for his scientific work. Klaus Jonas has taught social and organizational psychology at universities in Germany, Austria and Switzerland. He is Professor of Social and Business Psychology at the University of Zurich. He has published on attitudes, stereotypes and human resource management. His current interests concern the influence of leadership on performance and satisfaction of subordinates.