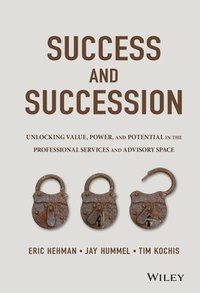 Unlocking Value, Power, and Potential in the Professional Services and Advisory Space

av Eric Hehman, Jay Hummel, Tim Kochis
Inbunden Engelska, 2015-10-23
429
Köp
Spara som favorit
Finns även som
Visa alla 2 format & utgåvor
An insightful look at leadership transition from the successor's perspective Success and Succession examines the leadership transition process from the successor's point of view, and outlines the considerations and strategies that lead to a better future for the business. With a focus on practical planning and execution, this insightful guide provides insight into the strategies that smooth the transition and help the new leadership make better business decisions. You'll learn when and how to start planning, who you need on your team, and the obstacles you should anticipate along the way. You'll learn to navigate the uncertainty the process entails, and how to identify opportunities for reciprocal understanding and adopt workable approaches for successful resolution of a multitude of transition issues. Interviews with those at various stages of transition highlight the real-world application of these ideas, and give you an inside look at what worked, what didn't, and what they wish they had thought of. The transition of leadership in an independent, non-public professional service business can be emotional and difficult for everyone. This book gives you a framework for smoothing the process and driving the best possible future of the business. * Consider the complexities of succession and transition * Balance conflicting dynamics of outgoing and incoming leadership * Plan for operational, financial, and emotional obstacles * Develop and execute a winning strategy for long term success The transition from founder to successor is far from an academic exercise, and is not linear. Answers are hard to find, and the ebb and flow of the process requires patience, creativity, and willingness to try again. Success and Succession provides a unique strategy for success, from the perspective of incoming leadership.
Visa hela texten

ERIC HEHMAN is Chief Executive Officer of Austin Asset. Eric joined Austin Asset in 1997 as an unpaid intern, became a principal in 1999, and CEO in 2007. In 2014, Eric completed the seven-year transition plan providing for the retirement of the firm's founder. JAY HUMMEL is a Senior Vice President in the Corporate Strategy group of Envestnet. He spends much of his time consulting with the company's largest Registered Investment Advisor (RIA) clients and prospects, helping them build and deliver on their strategic vision through their partnership with Envestnet. TIM KOCHIS is a 40-plus-year veteran of the wealth management industry and a founder and former CEO and Chairman of Aspiriant. He successfully transitioned equity ownership and management responsibility and now consults with firms around the world facing similar issues.