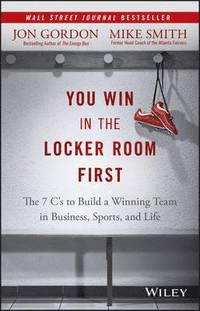 You Win in the Locker Room First

The 7 C's to Build a Winning Team in Business, Sports, and Life

av Jon Gordon, Mike Smith
Inbunden Engelska, 2015-10-27
179
Köp
Spara som favorit
Skickas inom 7-10 vardagar.
Gratis frakt inom Sverige över 159 kr för privatpersoner.
Finns även som
Visa alla 2 format & utgåvor
NFL head coach Mike Smith lead one of the most remarkable turnarounds in NFL history. In the season prior to his arrival in 2008, the Atlanta Falcons had a 4 12 record and the franchise had never before achieved back-to-back winning seasons. Under Smith s leadership, the Falcons earned an 11 5 record in his first season and would go on to become perennial playoff and Super Bowl contenders earning Smith AP Coach of year in 2008 and voted Coach of Year by his peers in 2008, 2010 and 2012. You Win in the Locker Room First draws on the extraordinary experiences of Coach Mike Smith and Jon Gordon consultant to numerous college and professional teams to explore the seven powerful principles that any business, school, organization, or sports team can adopt to revitalize their organization. Step by step, the authors outline a strategy for building a thriving organization and provide a practical framework that give leaders the tools they need to create a great culture, lead with the right mindset, create strong relationships, improve teamwork, execute at a higher level, and avoid the pitfalls that sabotage far too many leaders and organizations. In addition to sharing what went right with the Falcons, Smith also transparently shares what went wrong his last two seasons and provides invaluable lessons leaders can take away from his victories, success, failures and mistakes. Whether it s an executive leadership team of a Fortune 500 company, a sports team, an emergency room team, military team, or a school team successful leaders coach their team and develop, mentor, encourage, and guide them. This not only improves the team, it improves the leaders and their relationships, connections, and organization. You Win in the Locker Room First offers a rare behind-the-scenes look at one of the most pressure packed leadership jobs on the planet and what leaders can learn from these experiences in order to build their own winning team.
Visa hela texten

Jon Gordon is the author of numerous bestselling books and his inspirational talks have inspired audiences around the world. His principles have been put to the test by countless Fortune 500 companies, school districts, hospitals, sports teams, and nonprofits. Jon invites you to visit and connect with him at JonGordon.com or on Twitter @JonGordon11. Mike Smith is the former head coach for the National Football League's Atlanta Falcons, a position he held from 2008 to 2014. He is the all-time winningest coach in franchise history. In his first season as Falcons head coach, Smith was recipient of the NFL Coach of the Year Award by the Associated Press. He was also named NFL Coach of the Year 3 times by Pro Football Weekly (2008, 2010 and 2012).

Introduction xi 1 Culture 1 Create a Winning Culture 3 Build Your Culture Up and Down 4 Everyone Creates Your Culture 6 X's and O's Are Overrated 8 Sustained Culture = Sustained Success 9 Know What You Stand For 10 Process and Milestones 12 Focus on the Root, Not the Fruit 16 You Have to Fight For Your Culture and Team 17 2 Contagious 21 Germ or Vitamin C? 23 Contagious with a Vision and Mission 24 Contagious with Your Belief 26 Contagious with a Positive Attitude 28 Contagious Leaders in the Locker Room 29 No Energy Vampires Allowed 33 The No Complaining Rule 35 3 Consistent 37 Consistency Wins the Locker Room 39 Consistency Wins in the Long Run 40 It's Not Okay to Be Moody 41 Be Consistent in Your Desire to Be Great 42 Complacency Is a Disease 43 Consistently Improving 45 Humble and Hungry 46 4 Communicate 49 The Most Important Thing a Coach Can Do 51 One-on-One Communication 52 Listening Enhances Communication 55 What's the Temperature Today? 57 Leading by Walking Around 59 Communicating the Message 61 The Power of an Outside Voice 63 The Enemies of Great Communication 64 Communication Must Lead to Collaboration 65 5 Connect 67 Communicating and Collaborating Leads to Connection 69 Team Beats Talent When Talent Isn't a Team 70 We Got This 71 Unplug from Technology and Plug into People 74 Create a Connected Locker Room 76 Connect Outside the Locker Room to Be Strong Inside the Locker Room 79 Stay Connected 81 6 Commitment 83 Commit if You Want Commitment 85 Commitment Begins with the Leader 86 Feeling Is More Powerful than Hearing 87 Serve to Be Great 89 Commitment Starts at Home 90 Commitment is Spelled T-I-M-E 91 When You Commit You Make Everyone Better 93 The Hard Hat 95 It's Not About You 97 Lose Your Ego 98 Commitment Requires Sacrifice 101 7 Care 103 Caring Is a Strategy 105 Care More 107 Create a Culture of Caring 109 Show You Care 110 More than a Uniform and Number 114 Transactional versus Transformational 115 Love Tough 116 Discover Your Caring Trademark 117 When You Care, Your Team Will Care 119 The Big C 121 The Other Big C 125 Beyond the 7 C's 129 Integrity 129 Be Passionate, Not Emotional 131 Create Your Own Style of Leadership 131 Leadership Is Both Macro and Micro 133 Lead Your Leaders 133 Focus on the Process 135 Forget the Past, Focus on the Fundamentals 137 LOSS: Learning Opportunity, Stay Strong 139 Culture Contamination 140 Don't Focus on Winning Championships; Focus on Developing Champions 141 The Time Is Now 142 Looking for Murphy 144 Pressure, Not Stress 145 Compete, then Unite 145 Speaking as One Voice to the Media 147 Become a Lifelong Learner 149 Leave Your Legacy 150 The Action Plan 153 Put the 7 C's to Work to Enhance Your Culture 159 Build a Winning Team 160 Other Books by Jon Gordon 161