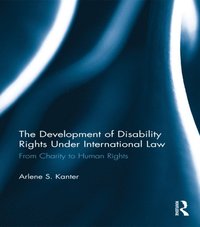 From Charity to Human Rights

Bloggat om Development of Disability Rights Under In...