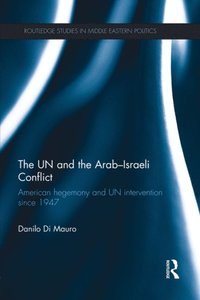 UN and the Arab-Israeli Conflict (e-bok)

American Hegemony and UN Intervention since 1947

av Danilo Di Mauro
E-bok (EPUB - DRM), Engelska, 2012-12-05
519
Ladda ned
Spara som favorit
Laddas ned direkt
Läs i vår app för iPhone, iPad och Android
Finns även som
Visa alla 3 format & utgåvor
This book provides a comprehensive empirical analysis of the United Nations intervention in the Arab-Israeli conflict since 1947. In his structured and exhaustive analysis, the author presents a long term perspective on the UN intervention in the conflict and explains its evolution during the last sixty years. He draws on a wealth of quantitative data to provide a complete picture of resolutions addressed to the Arab-Israeli conflict by the General Assembly and the Security Council, the mediation activity, and the UN peace missions in the area. Through his analysis, Di Mauro addresses such questions as: Why did the United Nations have different involvement and efforts of interventions in the conflict?How did the role of the UN change during the dispute, and why did it change? Is there still a role for the UN in the Palestinian-Israeli peace process?Offering a contribution to both to the studies of UN intervention in conflict resolution and, more broadly, to the UN role in the international system, The UN and the Arab-Israeli Conflict will be of great interest to International Relation scholars and students, but also appreciable by historians, political scientists, methodologists and all the social scientists interested in the Palestine question and the United Nations.
Visa hela texten