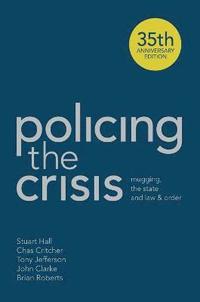 Mugging, the State and Law and Order

The initial publication of Policing the Crisis was a key moment in the history of critical social science. The book was a prescient, extraordinary piece of critical scholarship. Over three decades on, its analytical clarity, and what it tells us about the exercise of power in an increasingly brutal, social environment, remains undiminished. The second edition, with additional material, is as relevant as its predecessor, a compelling read not only for students and academics, but also for anyone interested in the history of the UK since 1945." - Joe Sim, Professor of Criminology, Liverpool John Moores University, UK Praise for the first edition: "... a remarkable tour de force which will provide an invaluable framework for any future work on crime, law and the state... It is a major achievement both in terms of its contribution to social theory and political debate" - British Journal of Sociology "... probably one of the most important books to be written on race relations in Britain" - Race and Class "... a penetrating study of post-war British society which not only has depth but is powerfully written... Policing the Crisis is an impressive combination of sophisticated theory and thorough concrete analysis" - Tribune

Stuart Hall is one of the founding figures of the Birmingham School of Cultural Studies, was formerly President of the BSA (1995-97) and is now Professor Emeritus at the Open University, UK. He is widely regarded as one of the leading cultural theorists of our time and is the author of many influential and highly-respected texts, including: The Hard Road to Renewal, Formations of Modernity, Questions of Cultural Identity and Cultural Representations and Signifying Practices. Chas Critcher is Visiting Professor in Media and Communications at Swansea University and Professor Emeritus at Sheffield Hallam University, UK. He originally studied at the Centre for Contemporary Cultural Studies at the University of Birmingham. Amongst his most recent publications are Moral Panics and the Media and the edited collection Critical Readings in Moral Panics and the Media. Tony Jefferson is Professor Emeritus at Keele University, UK. He has held Visiting Professorships in Denmark, Sweden, Australia and the USA. Throughout his career he has written many highly-respected texts, including Interpreting Policework, Doing Qualitative Research Differently and Psychosocial Criminology. John Clarke is Professor of Social Policy at the Open University, UK and has been a visiting scholar at a number of other institutions including NOVA in Oslo, the Danish Social Research Institute (SFI) in Copenhagen, the University of North Carolina at Chapel Hill, and Central European University in Budapest. His publications include Changing Welfare; Changing States, Creating Citizen-Consumers and Publics, Politics and Power. Brian Roberts is Visiting Professor in the School of Applied Social Sciences, Durham University, UK. His writings and research interests include biographical sociology, identity and communal change, Welsh social history, performative social science, and the relation between the arts and social science. His publications include: Biographical Research; Micro Social Theory; and Getting the Most out of the Research Experience.

Preface to the Second Edition.- Introduction to the First Edition.- PART I.- The Social History of a Moral Panic.- The Origins of Social Control.- The Social Production of News.- PART II.- Balancing Accounts: Cashing in on Handsworth.- Orchestrating Public Opinion.- Explanations and Ideologies of crime.- PART III.- Crime, Law and the State.- The Law-and-Order Society: the Exhaustion of 'Consent'.- The Law-and-Order Society: Towards the 'Exceptional State'.- PART IV.- The Politics of 'Mugging'.- Conclusion to the Second Edition: Reflections and new considerations.