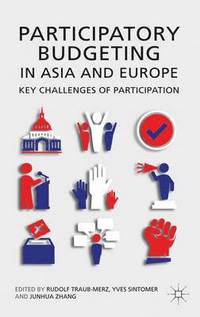 Participatory Budgeting in Asia and Europe

av Carsten Herzberg, Y Sintomer, R Traub-Merz, J Zhang
Inbunden Engelska, 2013-03-25
1159
Köp
Spara som favorit
Citizens' participation, especially participatory budgeting, has spread out in both continents, even if the context is very different. This book offers an overview of the latest developments in democratic innovation, presenting contributions from scholars and practitioners of each continent who are highly recognised as experts in their fields.
Visa hela texten

YVES SINTOMER is a Professor of Sociology in the Department of Political Science at Paris 8 University, France. Since 2009, he has also been guest professor at Neuchatel University, Switzerland. RUDOLF TRAUB-MERZ holds a Ph.D. in Sociology from the University of Tubingen, Germany where he specialized on the political economy of development in Africa. In 1986, he joined the Friedrich-Ebert-Stiftung (FES), and subsequently, became country representative in Nigeria, Zimbabwe and the Philippines. JUNHUA ZHANG is Professor in the Political Science department at the College of Public Administration at Zhejiang University, China. He served as the Director of the Asian Center for Development and Transformation in Berlin, Germany until 2006.