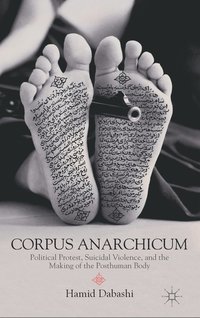 Political Protest, Suicidal Violence, and the Making of the Posthuman Body

"Passionate, courageous and compelling in every chapter, Corpus Anarchicum draws on an exceptional range of texts, from the Qur'anic to the cinematic, to trace the configurations of suicidal violence as a mode of political protest against the combined horror of the postmodern imperium and local tyrannies that has given rise to it. Rigorous in his analysis, but never indifferent to the suffering of the victims, Hamid Dabashi marries righteous indignation with profound reflections on the making of the 'posthuman' body, breaking entirely new ground in our understanding of suicidal violence in some of its most unsettling manifestations today." Alamin Mazrui, professor, Department of African, Middle Eastern and South Asian Languages and Literatures, Rutgers University "This exciting new volume is a remarkable meditation on suicidal violence and the fragility of the human body, incited by the experience of 9/11 and its violent aftermath, as well as by the popular uprisings following Bouazizi's immolation. Dabashi seeks to explain suicide as a political expression/military instrument, and explores with considerable originality the meanings of that violence in our contemporary world. The result is a provocative contribution to the rethinking of our present." Talal Asad, Department of Anthropology, City University of New York "Dabashi synthesizes his encyclopedic knowledge of sociology, philosophy, theology, political theory, literary and film criticism, and semiotics, as well as his perceptive analyses of historical and current events, to provide a novel interpretation of the body as the site of the political. This work is a major contribution to scholarly thinking one that will be a new benchmark for which scholars working in related fields ought to strive." Lucian Stone, assistant professor of Philosophy and Religion, University of North Dakota

Hamid Dabashi is the Hagop Kevorkian Professor of Iranian Studies and Comparative Literature at Columbia University in New York.