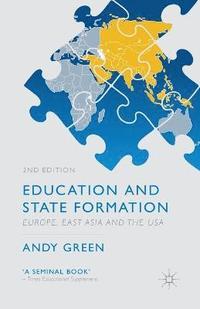 Europe, East Asia and the USA

av A Green
Häftad Engelska, 2013-10-23
666
Köp
Spara som favorit
Fåtal ex i lager. Skickas inom 1-2 vardagar.
Fri frakt inom Sverige för privatpersoner.
Finns även som
Visa alla 2 format & utgåvor
Education has always been a key instrument of nation-building in new states. National education systems have typically been used to assimilate immigrants; to promote established religious doctrines; to spread the standard form of national languages; and to forge national identities and national cultures. They helped construct the very subjectivities of citizenship, justifying the ways of the state to the people and the duties of the people to the state. In this second edition of his seminal and widely-acclaimed book on the origins of public education in England, France, Prussia, and the USA, Andy Green shows how education has also been used as a tool of successful state formation in the developmental states of East Asia. While human capital theories have focused on how schools and colleges supply the skills for economic growth, Green shows how the forming of citizens and national identities through education has often provided the necessary condition for both economic and social development.
Visa hela texten

Standing Conference of Studies in Education Annual Book Awards Winner - Second Prize 'A seminal book' - Anne Corbett, Times Educational Supplement 'A courageous and challenging book' - Roy Lowe, History of Education 'Andy Green has written a very good book indeed.' - Roger Dale, Journal of Education Policy 'A vital contribution to our understanding of the changing role of the state in education provision. It should be read widely.' - Clyde Chitty, Forum 'learned, thought-provoking and well written.' - Patrick Harrigan, Historical Studies in Education 'The book is eminently readable, and well argued and documented.' - Witold Tulasiewicz, Comparative Education 'Green has provided a work of such depth and scope that historians and sociologists might ignore at their own considerable loss.' - Dianne Snow, Comparative Education 'Andy Green's recently updated analysis of the relationship between nation states and the education systems that they establish or support is widely regarded as a classic sociology of education text.' - British Educational Research Association (BERA) 40 @ 40 "The new edition of this book by Professor Andy Green is path-breaking in filling the gap of research on the intricate interplay of educational systems and state ... It should not be missed by any scholar who is in the field of comparative and international education, history, sociology, political science, and/or developmental studies, and by practitioners in educational policy, politics and development ... In just one volume the broad, historical overview is provided of the interaction between of educational systems and state formation." - Jun Li, Chinese University of Hong Kong "Nevertheless, it is not the successful articulation between economics and education that most interests Andy Green, but rather the role played by education in the state formation of developmental states. To the extent that these states' principal goal is an economic one, these two levels are often confused, and it is perhaps Green's insistent attempts to separate them that is one of his work's most interesting contributions." - Einzelbelsprechung

Andy Green is Professor of Comparative Social Science and Director of the ESRC Research Centre on Learning and Life Chances in Knowledge Economies and Societies (LLAKES), Institute of Education, University of London, UK. His previous publications include Regimes of Social Cohesion, Education and Development in a Global Era and Education, Equality and Social Cohesion.