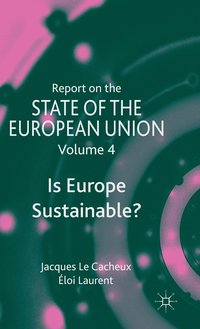 Report on the State of the European Union

av E Laurent, Jacques Le Cacheux, David Jasper
Inbunden Engelska, 2014-12-19
1299
Köp
Spara som favorit
Finns även som
Visa alla 1 format & utgåvor
This volume is the fourth instalment of the 'Report on the state of the European Union' series. Its shows that if the EU does not want to be ruled by crisis any longer, it must invest in sustainability, political, economic, social and environmental. Europe must turn this elusive and ever-threatening 'crisis' into a chosen and meaningful transition.
Visa hela texten

Jacques Le Cacheux is Professor of Economics at the Universite de Pau et des Pays de l'Adour. He also teaches economics at Sciences Po (Paris) and Stanford University Program in Paris. He has been an economist at the Observatoire francais des conjonctures economiques (OFCE) for over three decades. Co-author and co-editor of many papers and volumes with Jean-Paul Fitoussi, including the series of Reports on the state of the European Union. He was one of the rapporteurs of the Stiglitz-Sen-Fitoussi Commission. Eloi Laurent is Senior Economist at OFCE/Sciences Po. A former aide in the French Parliament and for the French Prime Minister, his current research agenda focuses on environmental sustainability and welfare economics. A former visiting scholar at Columbia University and Harvard University Center for European Studies, he currently teaches at Stanford University and Sciences Po. He was an invited Professor at the University of Montreal and Harvard University.

Introduction: From Crisis to Sustainability PART I: DEMOCRACY AND GOVERNANCE 1. The EU and the Paradox of Democracy 2. The State of Economic Governance PART II: PUBLIC FINANCE 3. Taxes 4. The EU Budget 5. Debt PART III: INEQUALITY 7. Inequality Between Countries 6. Inequality Within Countries PART IV: ENERGY AND THE ENVIRONMENT 8. The EU as a Global Ecological Leader 9. Energy and Climate Policy on the Road to Paris 2015 10. The EU "beyond GDP"