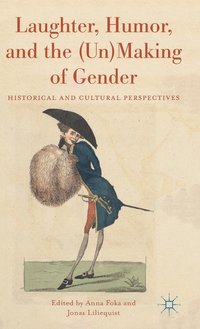 Laughter, Humor, and the (Un)making of Gender

"I find Laughter, Humor, and the (Un)making of Gender to be a brilliant manifestation of the innovative power of the cultural history of emotion and its ability to create fresh perspectives that transcend disciplinary, cultural, and regional boundaries. The authors have compiled a stimulating collection of papers that range over the cultures of the globe and cast new light on the much-studied topic of gender by illuminating the constitutive power of what makes us laugh." - Walter G. Andrews, Near Eastern Languages and Civilization, University of Washington, Seattle, USA "How is it possible that we have for so long missed the ways in which humor constructs, maintains, and undermines gender stereotypes? With essays spanning the pre-modern period and touching on non-Western cultures, this book offers a dynamic way to reconsider humor's key role in human lives." - Barbara H. Rosenwein, Loyola University Chicago, USA "A fresh look at longstanding questions, across a temporal range (classical antiquity to the early modern) and a geographical range (Asia to Europe, Islam to Christendom) too rarely spanned; not the usual suspects, either. The optimistic investigators find gender subversion, women's agency, and men's self-criticism in comic forms from high (Homer) to low (folklore, burlesque, jokes, cartoons), imagining a complex audience. A valuable resource." - Amy Richlin, Professor, Classics, University of California, Los Angeles, USA "This excellent collection of essays ranges across space and time from early medieval China through medieval Iceland to seventeenth-century Sweden. The authors draw on a wide range of visual and literary evidence including images on classical Greek vases, medieval French fabula, and early modern English jest-books, but also engage with a rich and varied historiography. Anyone interested in cultural history before 1800 will learn something from this volume." - Tim Reinke-Williams, University of Northampton, UK