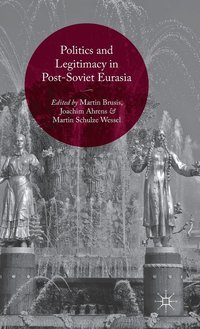 Politics and Legitimacy in Post-Soviet Eurasia

"It is quite rare to find an academic publication of the same analytical depth and theoretical insight as Brusis, Ahrens, and Wessel's edited volume. The book presents a great selection of theoretical and empirical contributions focusing on a variety of issues in the former Soviet republics." (Aijan Sharshenova, Journal of Soviet and Post-Soviet Politics and Society, Vol. 3 (1), 2017) "The volume consists of 10 chapters focusing on different geographical areas of post-Soviet Eurasia (PSE) that range substantively from the evaluation of party systems, political economy to national discourses, patriotic education, court systems, literature and memory politics, ... the book will be of a great interest for postgraduate students and scholars in a variety of fields and will hopefully serve as a good basis for further detailed and comparative studies on legitimacy in democratic and non-democratic states." ( Diana T. Kudaibergenova, Democratization, Vol. 25 (2), September, 2016) "This edited volume of ten articles provides an in-depth look at various facets of the concept of institutional legitimacy, as it pertains to the states of post-Soviet Eurasia. The book's interdisciplinary nature provides a wide scope in a variety of case studies, showcasing the different levels of interaction within the Eurasian regimes. ... It is an important resource for the study of legitimacy, especially as many of the regimes under study currently find themselves in crisis." (Mark Teramae, Europe-Asia Studies, Vol. 68 (9), 2016)