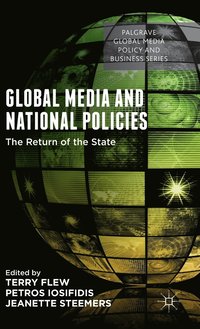 The Return of the State

av Terry Flew, Petros Iosifidis, Jeanette Steemers
Inbunden Engelska, 2016-01-12
1269
Köp
Spara som favorit
Finns även som
Visa alla 1 format & utgåvor
Conventional wisdom views globalization as a process that heralds the diminishing role or even 'death' of the state and the rise of transnational media and transnational consumption. Global Media and National Policies questions those assumptions and shows not only that the nation-state never left but that it is still a force to be reckoned with. With contributions that look at global developments and developments in specific parts of the world, it demonstrates how nation-states have adapted to globalization and how they still retain key policy instruments to achieve many of their policy objectives. This book argues that the phenomenon of media globalization has been overstated, and that national governments remain key players in shaping the media environment, with media corporations responding to the legal and policy frameworks they deal with at a national level.
Visa hela texten

Terry Flew is Professor of Media and Communications at the Queensland University of Technology, Brisbane, Australia. He is the author of The Creative Industries, Culture and Policy, Global Creative Industries, New Media: An Introduction and Media Economics. He chairs the Global Communication and Social Change Division of the International Communications Association. Petros Iosifidis is Professor in Media Policy at City University London, UK. He is the author of five books and has published extensively in refereed journals. He serves as an ESRC Peer Review College reviewer and as a national expert for EU projects. He is Editor of the International Journal of Digital Television. Jeanette Steemers is Co-Director of the Communications and Media Research Institute (CAMRI) at the University of Westminster, UK. She has published widely on TV exports, media industries and children's television, and her work has been funded by the British Academy, the Leverhulme Trust and the AHRC.