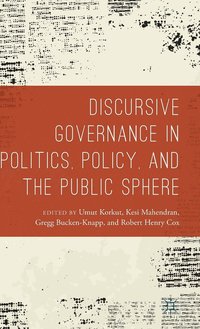 Discursive Governance in Politics, Policy, and the Public Sphere

"The volume offers a wide range of contributions to several highly actual problems (such as the migration problem or the future perspectives of the welfare state), and sophisticated analyses about their impacts on concrete policy fields. Researchers interested in the topics of European integration or gender equality, and in critical or feminist perspectives could also read it with interest." (Gabor Illes, Intersections, Vol. 2 (1), 2016)

Ima Jackson is an experienced clinician and lecturer in Health Sciences at Glasgow Caledonian University. She specialises in migration and transnational workforce issues as well as gendered migration policy. Anubhuti Kapoor is an independent researcher, who completed her Master's in Social and Cultural Psychology at the London School of Economics. Within her dissertation she examined how religious beliefs influenced integration and belonging of both migrants and non-migrants in London. Lena Karamanidou is a Lecturer at the Department of Sociology at City University London. Her research interest include the political discourse of asylum and migration, the migration discourse of far right parties in Greece, asylum and migration policies, and the intersections between migration, exclusion and the state. Mikael Nygard, PgD, is professor in social policy at Abo Akademi University, Finland. His research interests range from welfare state reform analysis, notably in the field of family policy, to empirical research on health, wellbeing and civic participation among different layers of the population. He has published books, book chapters and articles in these and related fields. Mikko Kuisma, PhD, is senior lecturer in international relations at Oxford Brookes University, United Kingdom. His research interests are in the comparative political economy of welfare states, with a special interest in the constitution of citizenship in national models of capitalism. Other related research interests include new institutional theory, global governance and global civil society, the future of internationalism and ethical foreign policy, and Nordic politics. Nicole Kruger, MS, is doctoral candidate in political science at the Technical University of Darmstadt, Germany is currently working as a school teacher in Darmstadt. Her doctoral research interests relate to family policy change in Germany, but she has also published articles family policy reform in Europe. Verity Campbell-Barr, PhD, is lecturer in early childhood studies at the Plymouth Institute of Education, Plymouth University, United Kingdom. Her research focuses on the mixed economy of early childhood education and care, understandings of value change as well as interplay of quality within both these areas. Aron Buzogany is teaching political science at the Freie Universitat Berlin and holds a doctoral degree from the same institution. Before returning to Berlin he held academic positions at the University of Munich, the German Public Administration Research Institute in Speyer and Yale University, where he was Fox International Fellow. His research is located at the intersection of research on European integration and Eastern European politics. Mari K. Niemi is a Senior Researcher at the Centre for Parliamentary Studies (University of Turku, Finland) and a Visiting Researcher at the University of Strathlyde (Glasgow, United Kindgom). Niemi's publications include articles, books and book chapters on Finland's political history, political campaigning, women's leadership and populist leadership. Marcin D?browski is a research fellow at the Department of Urbanism at TU Delft. At present, he works on governance of urban regions and climate change policy. His specialization is EU cohesion policy, multi-level governance, urban development and policy transfer in the field of regional policy. Angela O'Hagan has a long career in gender equality policy and practice. Her research interests include gender analysis of public processes and institutions in Scotland, UK and Spain, particularly gender budget analysis and feminist policy change. She is engaged in a number of civil society organizations and international networks. Alexandra Boussiou is a PhD candidate in the Department of Political Science and Public Administration (University of Athens), in the research field of comparative migration policies. She has a master's degree in International Relations and Strategic Studies, from Pantei