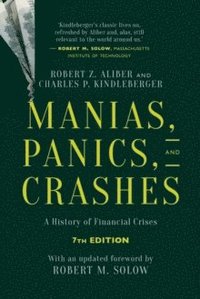 "The turmoil of 2007-8 reminded us only too painfully that financial crises are not confined to distant times and places. This latest edition of Charlie Kindleberger's classic study of man's serial financial follies, updated by Robert Aliber, brings the story right up to the present. A fount of wisdom not only for students of finance and economics, but also for central bankers and financial market practitioners." Professor Sir Charles Bean, The London School of Economics, UK "Since its original publication, this has been one of my indispensable books. It served to help me grasp the gravity of financial crises that afflicted my country and guided me, hopefully, to recommend and take better policy decisions. It has also been an essential teaching tool. For example, on 15 September 2008 I asked my students to read at once several chapters so that they could better understand the events that started to unfold that morning. I welcome with enthusiasm this new edition!" - Ernesto Zedillo Ponce de Leon, Director Yale Center for the Study of Globalization; Former President of Mexico "Underneath the hilarious anecdotes, the elegant epigrams, and the graceful turns of phrase, Kindleberger is deadly serious. The manner in which humans beings earn their livings is no laughing matter to him, especially when they attempt to do so at the expense of one another. As he so effectively demonstrates, manias, panics, and crashes are the consequence of an economic environment that cultivates cupidity, chicanery, and rapaciousness rather than a devout belief in the Golden Rule." - From the Foreword to the Fourth Edition by Peter L. Bernstein, author of The Power of Gold "Alas, both the need for a book such as Manias, Panics and Crashes, and the coverage of its material, keep on increasing, almost exponentially. So much has happened in the last few years that this is now Bob Aliber's book, as much as, perhaps more, than Charles Kindleberger's. Aliber has enhanced the prior high standards that Kindleberger set. This is an easily accessible book, filled with fascinating historical vignettes, and one that everyone from the experts to newcomers to the field should read and would profit greatly by doing so." - Charles Goodhart, London School of Economics, UK

Robert Z. Aliber is Professor Emeritus of International Economics and Finance at the University of Chicago Booth School of Business, USA. He was director of the Center for Studies in International Finance; on the research staff for the Committee for Economic Development and Commission on Money and Credit; and senior economic advisor for the Agency for Economic Development, U.S. Department of State. Best-selling publications include The Reconstruction of International Monetary Arrangements (ed., Macmillan, 1986), The Handbook of International Financial Management (ed. Dow Jones Irwin, 1989), and Global Portfolios (co-editor, Business One Irwin, 1991). He is a co-author of Money, Banking, and the Economy (Norton, First Edition, 1981, Fourth Edition 1990), Manias, Panics, and Crashes: A History of Financial Crises (Palgrave MacMillan, 5th ed. 2005, 6th ed. 2011), and author of The International Money Game (Palgrave MacMillan, 2001). Aliber has consulted to the Board of Governors of the Federal Reserve System and to other U.S. government agencies, the World Bank and the International Monetary Fund, testified before committees of the Congress, and lectured extensively in the United States and abroad. The late Charles P. Kindleberger was the Ford Professor of Economics at MIT for 33 years and author of over 30 books. He was best known as a financial historian, whom the Economist referred to as 'the master of the genre' on financial crisis. He advanced the study of international finance and helped to devise the Marshall Plan, approved by Congress, for Europe's reconstruction after World War II. During his tenure at MIT, Kindleberger was a consultant to the federal government several times, most often for the Treasury and the Federal Reserve. In 1985, he was president of the American Economic Association. Select key publications by Kindleberger include: International Short-Term Capital Movements (Columbia University Press, 1937), The Dollar Shortage (New York: Wiley and MIT Press, 1950), International Economics (Richard D. Irwin, 1953, 1958, 1963, 1968, 1973, (and with Peter H. Lindert) 1978, 1982), Economic Development (McGraw-Hill, 1958, 1965, (and with Bruce Herrick) 1977, 1983), The World In Depression, 1929-1939 (University of California Press, 1973, revised and enlarged, 1986), and Manias, Panics, and Crashes: A History of Financial Crises (Palgrave Macmillan, 1978, revised and enlarged, 1989, 3rd ed. 1996, 4th ed. 1996), The Life of an Economist: An Autobiography (Basil Blackwell, 1991).

Foreword - Robert Solow Introduction 1. Financial Crises: a Hardy Perennial 2. The Anatomy of a Typical Crisis 3. Speculative Manias 4. Fueling the Flames: the Expansion of Credit 5. The Critical Stage - When the Bubble Is About To Pop 6. Euphoria and Paper Wealth 7. Bernie Madoff: Frauds, Swindles, and the Credit Cycle 8. International Contagion 1618-1930 9. Bubble Contagion: Mexico City to Tokyo to Bangkok to New York, London, and Reykjavik 10. Euromania and Eurocrash 11. Policy Responses: Benign Neglect, Exhortation, and Bank Holidays 12. The Domestic Lender of Last Resort 13. The International Lender of Last Resort 14. The Lehman Panic - An Avoidable Crash 15. The Lessons of History Epilogue Afterword - Lord Robert Skidelsky