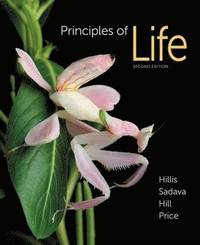 av Richard W Hill, David M Hillis, Mary V Price, David Sadava
Book Engelska, 2015-07-08
707
Bevaka
Spara som favorit
Ännu ej utkommen – klicka "Bevaka" för att få ett mejl så fort boken boken går att köpa.
Principles of Life 2E provides a textbook well aligned with the recommendations proposed in BIO 2010: Transforming Undergraduate Education for Future Research Biologists and Vision and Change in Undergraduate Biology Education. This multi-media pack contains the print textbook and LaunchPad access for an additional GBP5 per student. LaunchPad is an interactive online resource that helps students achieve better results. LaunchPad combines an interactive e-book with high-quality multimedia content and ready-made assessment options, including LearningCurve, our adaptive quizzing resource, to engage your students and develop their understanding. Unique LaunchPad features included in Principles of Life 2E: * Pre-built Units for each chapter, curated by experienced educators, with media for that chapter organized and ready to assign or customize to suit your course. * Intuitive and useful analytics, with a Gradebook that lets you see how your class is doing individually and as a whole. * A streamlined and intuitive interface that lets you build an entire course in minutes. LearningCurve in Launchpad In a game-like format, LearningCurve adaptive and formative quizzing provides an effective way to get students involved in the coursework. It offers: * A unique learning path for each student, with quizzes shaped by each individual's correct and incorrect answers. * A Personalised Study Plan, to guide students' preparation for class and for exams. * Feedback for each question with live links to relevant e-book pages, guiding students to the reading they need to do to improve their areas of weakness. For more information on LaunchPad including how to request a demo, access our support centre, and watch our video tutorials, please visit here. Request a demo
Visa hela texten

David M. Hillis is the Alfred W. Roark Centennial Professor in Integrative Biology at the University of Texas at Austin, USA where he also has directed the Center for Computational Biology and Bioinformatics and the School of Biological Sciences. Dr. Hillis has taught courses in introductory biology, genetics, evolution, systematics, and biodiversity. He has been elected to the National Academy of Sciences and the American Academy of Arts and Sciences, awarded a John D. and Catherine T. MacArthur Fellowship, and has served as President of the Society for the Study of Evolution and of the Society of Systematic Biologists. He served on the National Research Council committee that wrote the report BIO 2010: Transforming Undergraduate Biology Education for Research Biologists, and currently serves on the Executive Committee of the National Academies Scientific Teaching Alliance. His research interests span much of evolutionary biology, including experimental studies of evolving viruses, empirical studies of natural molecular evolution, applications of phylogenetics, analyses of biodiversity, and evolutionary modeling. He is particularly interested in teaching and research about the practical applications of evolutionary biology. David E. Sadava is the Pritzker Family Foundation Professor of Biology, Emeritus, at the Keck Science Center of Claremont McKenna, Pitzer, and Scripps, three of The Claremont Colleges. In addition, he is Adjunct Professor of Cancer Cell Biology at the City of Hope Medical Center. Twice winner of the Huntoon Award for superior teaching, Dr. Sadava has taught courses on introductory biology, biotechnology, biochemistry, cell biology, molecular biology, plant biology, and cancer biology. In addition to Life: The Science of Biology, he is the author or coauthor of books on cell biology and on plants, genes, and crop biotechnology. His research has resulted in many papers coauthored with his students, on topics ranging from plant biochemistry to pharmacology of narcotic analgesics to human genetic diseases. For the past 15 years, he has investigated multi-drug resistance in human small-cell lung carcinoma cells with a view to understanding and overcoming this clinical challenge. At the City of Hope, his current work focuses on new anti-cancer agents from plants. Richard W. Hill is Professor in the Department of Zoology at Michigan State University, USA and a frequent Guest Investigator at Woods Hole Oceanographic Institution. He received his Ph.D. in Zoology from the University of Michigan. Apart from Sinauer Associates' editions of Animal Physiology, Dr. Hill has authored two other books on the subject (the second with Gordon Wyse), as well as numerous articles for scientific journals, encyclopedias, and edited volumes. Among the awards he has received are the Outstanding Faculty Award (Michigan State University Senior Class Council) and election as Fellow of the American Association for the Advancement of Science. He was a U.S. Senior Fulbright Scholar in 2000-2001. His research interests include: temperature regulation and energetics in birds and mammals, especially neonates; and environmental physiology of marine tertiary sulfonium and quaternary ammonium compounds, especially in the contexts of biogeochemistry and animal-algal symbioses. Mary V. Price is Professor of Biology, Emerita, at the University of California Riverside and Adjunct Professor in the School of Natural Resources and the Environment at the University of Arizona, USA. In 'retirement,' she continues to teach and study, having learned the joy and art of scientific discovery as an undergraduate student at Vassar College and doctoral student at the University of Arizona. Dr. Price has mentored and published with independent-research students and has developed and taught general biology and ecology courses from introductory (majors and nonmajors) to graduate levels. She has particularly enjoyed leading field classes in the arid regions of N