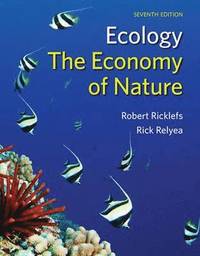 The Economy of Nature plus LaunchPad

Robert E. Ricklefs is Curators' Professor of Biology at the University of Missouri-St. Louis, USA, where he has been a member of the faculty since 1995. Bob's research focuses on diversity in ecological systems at several levels of organization and scales of time and space, and he has championed the importance of recognizing the impact of large-scale processes on local ecological assemblages of species. He is one of the world's leading authorities in population ecology of birds. Bob's contributions to the field have been recognized by honorary doctorates from the Universite Catholique de Louvain (Belgium), Aarhus University (Denmark), and the University of Burgundy (France). Rick Relyea is Professor of Biology at the University of Pittsburgh, USA, where he has also been named a Chancellor's Distinguished Researcher. He received his PhD from the University of Michigan in 1998 under the mentorship of Earl Werner. As director of the Pymatuning Laboratory of Ecology (University of Pittsburgh's field station), Rick investigates a wide variety of topics related to the biology, toxicology, and conservation of aquatic systems, as well as overseeing a diverse set of ecological field courses and facilitating researchers from around the world. He has taught thousands of undergraduate students in introductory ecology, behavioral ecology, and evolution.