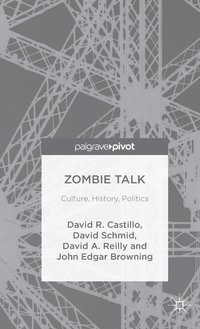 Reader Report on First Draft Aviva Briefel Professor of English and Cinema Studies Bowdoin College, USA I am grateful to have had the opportunity to review the proposal for The Zombie Dialogues: Culture, History, Politics. However, while it presents some very interesting observations about the horror genre and monstrosity more generally, the proposal as it stands (including the three chapters included with it) does not offer a sustained analysis of the figure of the zombie through 'an array of disciplinary and theoretical approaches.' In fact, the project often steers away from the zombie to examining other figures of monstrosity. While in another context this approach might provide a useful point of comparison through which to examine the monster in question, the impulse in the included chapters-especially in Chapter 4-is to look beyond this figure altogether to make broader, and sometimes overly general claims, about monstrosity as an umbrella category. When the object of focus is the zombie, as in Chapter 1, the discussion tends to rely on observations about this monster that have already been explored by other critics (this first chapter relies too heavily on Gregory Waller's reading of the zombie). For its part, Chapter 2 makes some gripping observations about the zombie genre (including the point on page 4 about the historical specificity of narratives of the fear of dying), but then turns to a catalogue of insufficiently analyzed or connected example. Finally, on a broader level, it concerns me that the project as a whole only contains four chapters, two of which have already been published elsewhere. With substantial revisions and restructuring, the project could make a worthwhile contribution to the field of zombie studies. But I do think that this would entail a substantial project overhaul to focus more intently on the idea of the dialogue. Can these chapters 'converse' with each other more directly, picking up on and expanding common ideas? It would also be useful to emphasize the notion of 'dialogue' within the chapters themselves. I was intrigued by the argument made in the first chapter that our modern zombies a hybrid construction of Matheson's and Romero's monsters, and it would be productive for the author to examine these intersections more actively and carefully. This would also allow the essay to distance itself from Waller and further develop its own readings of the text. Likewise, the second chapter might push further on the intersections and differences between zombies and vampires as 'capitalist' monsters, an idea that is promising but not sufficiently developed. Chapter 4 in particular would need a lot of work to fit into this new paradigm, but a greater focus on the connection between the zombie and broader models of neoliberal monstrosity would be a first step here. My conclusion is thus that this project cannot be published as it is described, and that it needs a substantial reconceptualization of its parameters and greater attention to the idea of 'dialogue.' I would also encourage the addition of one more chapter to provide another perspective on the topic of zombies, although this may not be absolutely necessary if the authors find a way to expand on their own arguments. Following these extensive revisions, Palgrave might consider reviewing another proposal for The Zombie Dialogues. Reader Report on Revised Draft Aviva Briefel Professor of English and Cinema Studies Bowdoin College, USA I am grateful to have had the chance to consider the proposal for Zombie Talk: Culture, History, Politics. The project as a whole takes a productive approach to addressing the questions raised by the popularity of zombies in contemporary culture-most notably, perhaps, why the zombie has reached such a degree of importance, and what this particular monster has come to signify. The study consists of four chapters (framed by a not-yet included foreword and introduction, as well as an afterword) that take up these is

Introduction: Our Zombies, Out Bodies; David R. Castillo and John Edgar Browning 1. Survival Horrors, Survival Spaces: Tracing the Modern Zombie (Cine)Myth Through to the Postmillennium; John Edgar Browning 2. Zombie Masses: Monsters for the Age of Global Capitalism; David R. Castillo 3. The Coming Apocalypses of Zombies and Globalization; David A. Reilly 4. The Limits of Zombies: Monsters for a Neoliberal Age; David Schmid Afterword: What Are We Talking About When We Talk About Zombies?; William Egginton