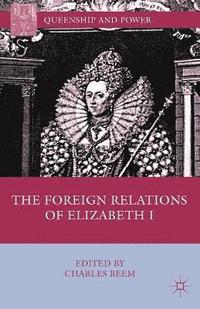 The Foreign Relations of Elizabeth I

av C Beem
Häftad Engelska, 2011-03-24
309
Köp
Spara som favorit
Skickas inom 10-15 vardagar.
Fri frakt inom Sverige för privatpersoner.
Finns även som
Visa alla 2 format & utgåvor
This edited volume brings together a collection of provocative essays examining a number of different facets of Elizabethan foreign affairs, encompassing England and The British Isles, Europe, and the dynamic civilization of Islam. As an entirely domestic queen who never physically left her realm, Elizabeth I cast an inordinately wide shadow in the world around her. The essays is this volume collectively reveal a queen and her kingdom much more connected and integrated into a much wider world than usually discussed in conventional studies of Elizabethan foreign affairs.
Visa hela texten

"Why did Elizabeth I never leave England, and what diplomatic issues did this fact of her monarchy create? The nimble essays collected in this volume ponder the condition of a thoroughly domesticated monarch in foreign contexts and are divided into three parts, each addressing one area of the diplomatic arena. . . . Scholars and graduate students interested in the emergent global presence of England at the close of Elizabeth's reign would benefit from this volume. The essays would also be useful for assignment to upper division undergraduates to stimulate engagement with notions of early modern gender and of emergent economies and commerce, as well as political economy." - Journal of British Studies "Charles Beem has brought together an interesting and diverse collection of essays [. . .] this is a very valuable work." - Sixteenth Century Journal "Covering a wide range of topics - from Elizabeth I's exchanges with the rulers of Morocco, Persia, and Russia to the representation of piracy on the English stage - this collection of essays offers fresh and lively perspectives on the queen's diplomacy and England's foreign relations. The authors do a fine job of integrating issues of gender with England's commercial and strategic interests." - Susan Doran, Senior Research Fellow at Jesus College, University of Cambridge and Director of Studies in History at Regent's Park College, University of Oxford "This is one of the most interesting books on Elizabeth I's international relations to appear for some time. It introduces new material and takes our view of the Elizabethan regime's diplomacy and cultural relations well beyond Europe, where enquiries to date have largely been contained. The book opens a dialogue between the traditionally separate spheres of foreign and domestic policy-making, offering new and interesting perspectives on the importance of domestic public opinion, commercial imperatives and works of literature" - Glenn Richardson, Reader in Early-Modern History, St Mary's University College, UK

Charles Beem is an Associate Professor of History at the University of North Carolina, Pembroke, USA, and the author of the Palgrave titles The Lioness Roared, The Royal Minorities of Early Modern England, and, most recently, The Name of a Queen: William Fleetwood's Itinerarium ad Windsor.

PART I: BRITAIN Why Elizabeth Never Left England; C.Beem & C.Levin Princess Cecilia's Visitation To England, 1565-66; N.Martin The 'Song On Queen Elizabeth': Coins, Clocks And The Stuff Of Political Satire In Dublin, 1560; B.Siegfried PART II: EUROPE Disgust, Lamentation, And Reconciliation: Queen Elizabeth's Mixed Reaction To The St. Bartholomew's Day Massacre; N.Probasco The Tsar And The Queen: You Speak A Language That I Understand Not; A.Riehl Bertolet Elizabeth Amongst The Pirates: Gender And The Politics Of Piracy In Thomas Heywood's Fair Maid Of The West, Part 1; C.Jowitt PART IV: ISLAM Elizabeth Through Moroccan Eyes; N.Matar Queen Elizabeth I And The Mashreq: Relations With Sovereigns Of The Islamic East; B.Andrea Elizabeth And India; N.Das