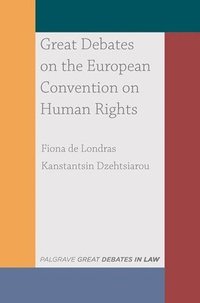 Great Debates on the European Convention on Human Rights

av Fiona De Londras, Kanstantsin Dzehtsiarou
Häftad Engelska, 2018-04-04
409
Köp
Spara som favorit
Skickas inom 5-8 vardagar.
Gratis frakt inom Sverige över 159 kr för privatpersoner.
Finns även som
Visa alla 1 format & utgåvor
This engaging textbook provides a critical analysis of the legitimacy and effectiveness of the European Convention on Human Rights and its practical operation. In a succinct way, the book investigates questions around the legitimacy of how the European Court of Human Rights develops its law, the obligations of states to comply with its judgments, the adequacy of the Convention in securing basic goods, and the effectiveness of the system in protecting rights 'in the real world'. It assesses some under-explored areas of the Convention that are often overlooked. Presenting a number of debates about the legitimacy and effectiveness of the system in a provocative and critical style, this book encourages debate, discussion, and self-reflection on how, when and why the Convention protects human rights in Europe. An ideal text for Law students at English and Welsh universities and higher education institutions taking a module in The European Convention on Human Rights (LLB or LLM level), and for GDL/CPE students and those taking the postgraduate LPC training course.
Visa hela texten

Fiona de Londras is the Professor of Global Legal Studies at the University of Birmingham. She has written widely on the ECHR, counter-terrorism, human rights, and comparative constitutional law, having published almost 100 books, chapters, articles, and edited volumes. Kanstantsin Dzehtsiarou is a Senior Lecturer in Law at the University of Liverpool. His research interests are spread between interpretation of the European Convention of Human Rights, reform of the European Court of Human Rights, administration of international justice, comparative and constitutional law.

Preface and Acknowledgements.- Abbreviations.- Table of Cases.- Introduction.- 1. The Convention, the Court, and the Heart of the Matter.- 2. Sovereignty and Authority.- 3. Admissibility.- 4. Evolution or Revolution?.- 5. Accounting for Difference: Proportionality and the Margin of Appreciation.- 6. The Convention in Times of Insecurity.- 7. Socio-Economic Rights and the European Convention on Human Rights.- 8. Implementing the Convention: The Execution of ECtHR judgments. .