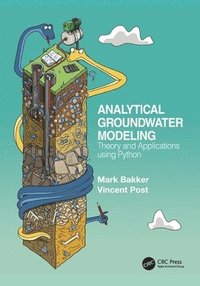 av Mark Bakker, Vincent Post
Häftad Engelska, 2019-09-01
669
Köp
Spara som favorit
Specialorder (osäker tillgång). Skickas inom 11-20 vardagar.
Fri frakt inom Sverige för privatpersoner.
Finns även som
Visa alla 1 format & utgåvor
This book covers the theoretical aspects of mathematical groundwater models. It is aimed at advanced (under)graduate university students, as well as practicing hydrogeologists. The focus is on the fundamentals of the quantitative methods used to simulate, understand, and investigate groundwater systems. Uniquely, it provides hands-on exercises based on the popular open-source programming language Python. The book's structure is such that the theoretical treatments of the modeling methods are exemplified by short pieces of computer code that demonstrate the implementation of the theory, making the book highly suitable for university courses on the fundamental aspects of groundwater modeling.
Visa hela texten

Mark Bakker is a civil engineer and a geohydrologist. His major interests concern the development of analytic elements for multi-layer flow, the simulation of flow in coastal aquifers, and the analysis of hydrological time series. For all three topics, the emphasis is on the development of new mathematical theories and their implementation in computer codes preferably written in Python.Mark obtained a Civil Engineering degree (combined BSc/MSc) from the Delft University of Technology in 1989 and a PhD in Civil Engineering from the University of Minnesota in 1994. He has worked for more than 10 years as a faculty member in the United States at the Universities of Nebraska and Georgia. In 2005 he joined the faculty of the Delft University of Technology where he is currently an Associate Professor. Mark is (co)author of more than 60 peer reviewed journal articles and is the author of a number of open source groundwater codes including the steady multi-layer analytic element code TimML and its transient brother TTim. Mark is the initiator and co-developer of the Sea Water Intrusion (SWI) package for MODFLOW, which is currently part of the standard MODFLOW2005 release. Together with Vincent Post he started the FloPy project, a community project which consists of a set of Python scripts to run MODFLOW and related programs such as SEAWAT and MT3D. Vincent Post is a hydrogeologist specialized in coastal groundwater systems and the development and application of reactive transport models. He obtained his MSc degree in Physical Geography (specialization Hydrology) from the VU University in 1997. In 1999 he started a PhD degree during which he studied the hydrogeological evolution of the Dutch coastal area during the Holocene and he obtained his doctoral degree in January 2004. He then worked for the Dutch Geological survey for a short period of time before returning to the VU University as an assistant professor, a position which he held between April 2004 and July 2010. He now works as a senior lecturer in hydrogeology at Flinders University in Adelaide.Since the start of his career he has gained extensive experience in groundwater modeling. His professional experience includes the application of variable-density flow and transport codes to coastal areas, the development of packages for MODFLOW to handle special boundary conditions, the development of PHT3D, a reactive transport code that couples the capabilities of the codes MODFLOW, MT3DMS and PHREEQC, the development of graphical user interfaces for the codes PHREEQC and MLU, and the development of an open-source Python library for MODFLOW-based models (FloPy), which he started together with Mark Bakker.He has published 35 articles in peer-reviewed scientific journals was a co-author of the Australian Groundwater Modelling Guidelines that was published by the National Water Commission in 2012. He also works as an editor for Hydrogeology Journal.