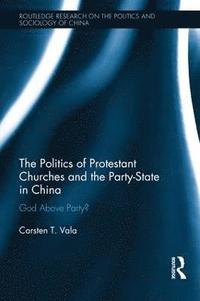 The Politics of Protestant Churches and the Party-State in China

av Carsten T Vala
Inbunden Engelska, 2017-08-31
1599
Köp
Spara som favorit
Skickas inom 7-10 vardagar.
Fri frakt inom Sverige för privatpersoner.
Finns även som
Visa alla 3 format & utgåvor
Among China's restive religious and social groups, Protestants have arguably created the most sustained structural challenges to the Chinese Communist Party's ordering of society. By drawing on grassroots fieldwork conducted across the country, this book therefore charts the ambition of the government to restrain Protestant population growth and direct it towards regime purposes. In particular, interviews with key church leaders who founded illegal Protestant congregations with hundreds of participants, reveal how officials and illegal congregational leaders have developed ties of trust and information that have permitted church growth, even as they preserve a public image of Party domination. Thus, by tracing the rise of large, illegal Protestant congregations apart from Party-state structures, this book highlights the importance of the public behaviour of religious actors and regime officials in understanding the dynamics of negotiation, domination, and resistance in 21st century China. Ultimately, The Politics of Protestant Churches and the Party-State in China paradoxically demonstrates that societal actors can alter the boundaries set by the Chinese Communist Party and the ways in which the Party is both more adaptive and resilient in its relations with society than first imagined. Offering the first book-length analysis of how ambitious Protestants have founded large, unregistered churches despite regime pressure, this book will be useful for students and scholars of Chinese Politics, Chinese Religion and Sociology.
Visa hela texten

"The Chinese government's destruction of churches and repression of its burgeoning Christian population has become a regular headline in the global press. The reality is more complex, Carsten Vala reveals, involving both repression as well as complex patterns of negotiation, even with illegal churches. Vala's study of Protestants in China offers a sophisticated theory of authoritarian rule, empirical drama, and astonishing new information on religion in China -- a research feat in itself. The upshot is a new standard of excellence in the literature on religion and politics." Professor Daniel Philpott, University of Notre Dame "The Politics of Protestant Churches and the Party-State provides new insight into official and unregistered churches in China, the porous and competitive boundaries between them, and their patterns of negotiation with the Party-state. It is an important addition to debates on religion and the state in China." Professor Karrie J. Koesel, University of Notre Dame "Based on years of original field research, Carsten Vala's exciting new book challenges conventional depictions of the relationship between China's Communist Party-state and religious organizations. The proposed "domination-negotiation" framework provides nuanced insight into the paradoxical co-existence of repression and unexpected space for religious practice under authoritarianism." Professor Kellee S. Tsai, Hong Kong University of Science & Technology "This is a very carefully researched book with nuanced theoretical arguments. Carsten Vala constructs a domination-negotiation model to describe and explain the dynamics of church-state interactions in China today, which accounts well for the emergence and growth of large "house-church" congregations in major cities in the 21st century." Professor Fenggang Yang, Purdue University

Bloggat om The Politics of Protestant Churches and t...

Carsten T. Vala is Associate Professor and Chairman in the Department of Political Science at Loyola University Maryland, USA.