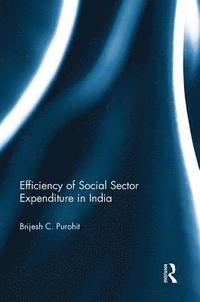 av Brijesh C Purohit
Häftad Engelska, 2017-04-13
529
Köp
Spara som favorit
Skickas inom 10-15 vardagar.
Fri frakt inom Sverige för privatpersoner.
Finns även som
Visa alla 3 format & utgåvor
Government investments in social sector has always played an important role in tackling social issues and facilitated in the alleviation of poverty. Hence, budgetary expenditure to be mobilized for such investments needs to be efficiently allocated and utilized to maximize the greatest good. This book focuses on the social sector in India and provides an overview of the sector. The book looks at 15 major Indian states between the year 2000-2011 to see how these states had invested in social sector and whether they had met the criteria of efficient social sector investment. Using stochastic frontier models, the book provides an efficiency norm and making use of this normative estimate, it compares performance across 15 Indian states and suggests important policy implications to improve the future performance of the social sector. The book adopts various quantitative techniques in the analysis and establishes that inefficient and inappropriate allocation of inputs was made in both health and education sectors. The book suggests that such problems and future challenges could be overcome by an appropriate mix of emphasis in different activities. This book will provide insight for those who want to learn more about how to build the capacity of the social sector in more efficient manner by exploring the social sector of India.
Visa hela texten

Brijesh C. Purohit is currently Professor at Madras School of Economics, Chennai, India. He received his doctorate in economics from the University of Mysore/ Institute for Social and Economic Change, Bangalore, India. Dr. Purohit began his academic career in 1986 and has held various positions. He worked as a researcher at the Center for Policy Research, New Delhi (1986); an economist at the National Institute of Public Finance and Policy, New Delhi (1986-90); an Associate Professor at the Indian Institute of Health Management Research, Jaipur (1990-96); South Asian Visiting Scholar at Queen Elizabeth House, University of Oxford (October 1996-March 1997). He has published in various national and international journals in the areas of health economics and financing and public and corporate finance.