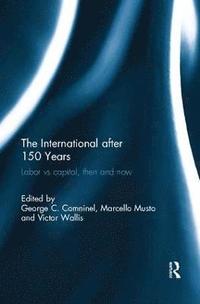 The International after 150 Years

Labor vs Capital, Then and Now

av George Comninel, Marcello Musto, Victor Wallis
Häftad Engelska, 2017-05-05
649
Köp
Spara som favorit
Finns även som
Visa alla 3 format & utgåvor
The International Workingmen's Association was the prototype of all organizations of the Labor movement and the 150th anniversary of its birth (1864-2014) offers an important opportunity to rediscover its history and learn from its legacy. The International helped workers to grasp that the emancipation of labour could not be won in a single country but was a global objective. It also spread an awareness in their ranks that they had to achieve the goal themselves, through their own capacity for organization, rather than by delegating it to some other force; and that it was essential to overcome the capitalist system itself, since improvements within it, though necessary to pursue, would not eliminate exploitation and social injustice. This book reconsider the main issues broached or advanced by the International - such as labor rights, critiques of capitalism and the search for international solidarity - in light of present-day concerns. With the recent crisis of capitalism, that has sharpened more than before the division between capital and labor, the political legacy of the organization founded in London in 1864 has regained profound relevance, and its lessons are today more timely than ever. This book was published as a special issue of Socialism and Democracy.
Visa hela texten

The International After 150 Years, edited by Comninel, Musto, and Wallis, although marking an important anniversary, could not have come at a better time. A century and a half after its birth, the lessons of the International Working Men's Association are now once again directly relevant to the world in which we live. The global assault of capitalism on workers and popular movements everywhere demands the creation in response of a New International - one which, as Marcello Musto eloquently says in his chapter, "cannot evade that twin requirement" of the old International: "it must be plural and it must be anti-capitalist." John Bellamy Foster, editor of Monthly Review This fine volume brings together leading scholars and movement activists in commemorating a turning point in the history of workers' struggles. It strikes a fruitful balance between reflections on the labour movement's past, and critical analysis of the present global situation. Ellen Meiksins Wood, author of Democracy Against Capitalism As capital became more mobile and global in the late 20th century, labor was slow to catch up. Now, workers under siege throughout the world better understand the need for cross-border solidarity and coordinated action against common corporate adversaries. This timely collection examines the origins of socialist-inspired labor internationalism and some of the challenges facing union campaigners today in the global north and south. The First International after 150 Years provides insights and inspiration for activists and academics alike. Steve Early author of Save Our Unions: Dispatches from a Movement in Distress This book is an especially timely and crucial reference now. Another global capitalist crisis, deepening inequalities of wealth and income, provokes again basic questions and challenges to capitalism. People need and increasingly want to learn (and build on) the critical lessons from the theories and practices of previous generations that sought to do better than capitalism. This book directly serves such needs and wants. Richard D. Wolff, Prof. of Economics Emeritus, Univ. of Massachusetts, USA

George Comninel has written books and articles on French Revolution and Marxism. His next volume, Marx's Conception of Alienation and Emancipation, is forthcoming with Palgrave Macmillan (2015). Marcello Musto teaches Sociological Theory at York University, Toronto. His books, articles and chapters have been published worldwide in sixteen languages. Among his edited and co-authored volumes are: Karl Marx's 'Grundrisse' (Routledge 2008); Marx for Today (Routledge 2012); Workers Unite! The International 150 Years Later (Bloomsbury 2014). www.marcellomusto.org Victor Wallis is the Managing Editor of Socialism and Democracy and the author of several articles on Marxism and Labor movement.