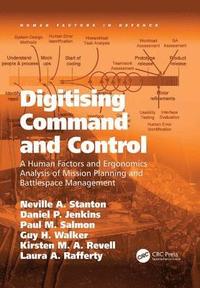 av Neville A Stanton, Daniel P Jenkins, Paul M Salmon, Guy H Walker, Kirsten M A Revell
Häftad Engelska, 2017-03-31
737
Köp
Spara som favorit
Finns även som
Visa alla 4 format & utgåvor
This book presents a human factors and ergonomics evaluation of a digital Mission Planning and Battle-space Management (MP/BM) system. An emphasis was placed on the activities at the Brigade (Bde) and the Battle Group (BG) headquarters (HQ) levels. The analysts distributed their time evenly between these two locations. The human factors team from Brunel University, as part of the HFI DTC, undertook a multi-faceted approach to the investigation, including: - observation of people using the traditional analogue MP/BM processes in the course of their work - cognitive work analysis of the digital MP/BM system - analysis of the tasks and goal structure required by the digital MP/BM - assessment against a usability questionnaire - analysis of the distributed situation awareness - an environmental survey. The book concludes with a summary of the research project's findings and offers many valuable insights. For example, the recommendations for short-term improvements in the current generation of digital MP/BM system address general design improvements, user-interface design improvements, hardware improvements, infrastructure improvements and support improvements. In looking forward to the next generation digital MP/BM systems, general human factors design principles are presented and human factors issues in digitising mission planning are considered.
Visa hela texten

'A thorough analysis of the various human factors critical to command and control planning and modeling of military missions. These include goal/function analysis, situation awareness, social interactions and cognitive work analysis, among others.' Thomas Sheridan, Massachusetts Institute of Technology, and Federal Aviation Administration, USA 'Computerizing complex undertakings is often promoted as a panacea. To be done properly, system designers and system owners must realise that they are building a socio-technical system, and that human factors therefore must be taken into account from the very start. Failing to do so will seriously hamper both the efficiency and the safety of the final product, as amply illustrated by this meticulous evaluation of a complex military system.' Erik Hollnagel, MINES ParisTech, France 'This book has emerged from the human factors contribution to assess and lead to improvements in a particular military system for mission planning and battle management. In taking the reader through the contributions to this work, the book provides excellent overviews of a range of approaches and methods in practice. Since the context remains the same throughout, this lends a coherence of explanation, a basis for comparison and a view on methods integration that is rarely found in the human factors literature. It is clear from the material in chapter 2 (on human factors in systems design) in particular and across the book as a whole that the authors take a systems ergonomics (or human factors) viewpoint, which is much to be welcomed. They, like many today, are dealing with complex systems, and so the understanding of and design for these is also a far more complex exercise than in years gone by. Their approach, and the readability of the book, will make it a very valuable resource for anyone engaged in analysis and subsequent (re) design of distributed socio-technical systems, in military or civilian worlds.' John Wilson, University of Nottingham, UK 'As new digital marvels appear everyday, it is easy to forget that command consists of a series of processes as old as wars themselves. In each generation the technology paraphernalia of the day, rather than revolutionizing military affairs, are pressed into service by ordinary people to carry out the re-planning, reconnaissance, coordination, and other processes of command, while these people endure the pressures of tempo, uncertainty and complexity. This book demystifies the digitization of military command and control and reveals that successful systems, as always, require careful attention to the details of users, use, and context. The book is a welcomed and detailed treatment of the limits and successes of current digital planning and management systems for the battlefield.' David Woods, Ohio State University , USA 'Digitising Command and Control: A Human Factors and Ergonomics Analysis of Mission Planning and Battlespace Management is well written, well referenced, with a logical structure and a consistent style (difficult to obtain in multiauthor texts). While all chapters are informative, the final chapter is particularly useful as the book achieves its aim of showing how human factors and ergonomics can be used to support system analysis and development. Given the paucity of information in that space, this book makes an important contribution to the development of digital command and control systems-it is a valuable resource.' Journal of Battlefield Technology, 2011 'The book thus invites careful contemplation by HF/E practitioners working on ADF command support issues, and project managers looking at their options for analysis and experimentation. It will be a useful addition to libraries in military systems engineering and human factors.' Australian Defence Force Journal, May 2011

Professor Stanton holds a Chair in Human Factors in the School of Civil Engineering and the Environment at the University of Southampton. He has published over 140 peer-reviewed journal papers and 14 books on Human Factors and Ergonomics. In 1998 he was awarded the Institution of Electrical Engineers Divisional Premium Award for a co-authored paper on Engineering Psychology and System Safety. The Ergonomics Society awarded him the Otto Edholm medal in 2001 and The President's Medal in 2008 for his contribution to basic and applied ergonomics research. In 2007 The Royal Aeronautical Society awarded him the Hodgson Medal and Bronze Award with colleagues for their work on flight deck safety. Professor Stanton is an editor of the journal Ergonomics and on the editorial boards of Theoretical Issues in Ergonomics Science and the International Journal of Human Computer Interaction. Professor Stanton is a Fellow and Chartered Occupational Psychologist registered with The British Psychological Society, and a Fellow of The Ergonomics Society. He has a BSc (Hons) in Occupational Psychology from the University of Hull, an MPhil in Applied Psychology and a PhD in Human Factors from Aston University in Birmingham. Dan Jenkins Graduated in 2004 from Brunel University with an MEng (Hons) in Mechanical Engineering and Design receiving the 'University Prize' for top student in the department. With over two years experienced as a Design Engineer in the Automotive Industry, Dan has worked in a number of roles throughout the world. This wide range of placements has developed experience encompassing design, engineering, project management and commercial awareness. Dan returned to Brunel in 2005 to become a Research Fellow in the Ergonomics Research Group, working primarily on the HFI-DTC project. Studying part-time, Dan gained his PhD in Human Factors and Interaction Design in 2008. Both academically and within industry Dan has always had a strong focus on customer orientated des