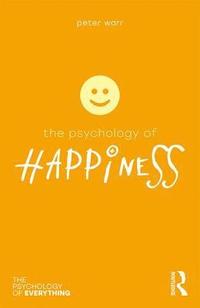 The Psychology of Happiness

av Peter Warr
Häftad Engelska, 2019-04-11
229
Köp
Spara som favorit
Skickas inom 7-10 vardagar.
Fri frakt inom Sverige för privatpersoner.
Finns även som
Visa alla 3 format & utgåvor
Is happiness all down to luck? Do events in our life influence how happy we feel? Can too much of a good thing make us less happy? The Psychology of Happiness introduces readers to the variety of factors that can affect how happy we are. From our personality and feelings of self-worth, to our physical health and employment status, happiness is a subjective experience which will change throughout our lives. Although feeling happy is linked with positive thinking and our sociability in daily life, the book also includes surprising facts about the limitations of our personal happiness. We all want to feel happy in our lives, and The Psychology of Happiness shows us that achieving it can be both an accident of fortune and as a direct result of our own actions and influence.
Visa hela texten

Peter Warr is Emeritus Professor of Psychology at the University of Sheffield, UK. He was previously Director of the MRC/ESRC Social and Applied Psychology Unit at that university, and has published more than 230 articles and 30 books across several areas of psychology. He is a Fellow of the International Association of Applied Psychology and has been awarded Honorary Fellowship of the British Psychological Society; that society has also presented him with its two awards for outstanding contributions to psychological knowledge. His current research concerns different forms of happiness and the links between those and behaviour.

Preface An initial look Hedonic wellbeing: Feeling bad to feeling good Flourishing wellbeing: Self-worth and a good life Influences from the world around you: Nine principal features Influences from within yourself Some consequences of happiness- What to do now? References cited in the text Notes about the text and some additional reading Index to topics in the book