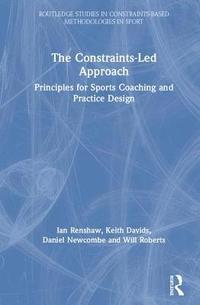 av Ian Renshaw, Keith Davids, Daniel Newcombe, Will Roberts
Inbunden Engelska, 2019-02-26
1649
Köp
Spara som favorit
Skickas inom 3-6 vardagar.
Fri frakt inom Sverige för privatpersoner.
Finns även som
Visa alla 3 format & utgåvor
For the last 25 years, a constraints-based framework has helped to inform the way that many sport scientists seek to understand performance, learning design and the development of expertise and talent in sport. The Constraints-Led Approach: Principles for Sports Coaching and Practice Design provides students and practitioners with the theoretical knowledge required to implement constraints-led approaches in their work. Seeking to bridge the divide between theory and practice, the book sets out an 'environment design framework', including practical tools and guidance for the application of the framework in coaching and skill acquisition settings. It includes chapters on constraints-led approaches in golf, athletics and hockey, and provides applied reading for undergraduate and postgraduate students of motor learning, skill acquisition and developing sport expertise. Providing a thorough grounding in the theory behind constraints-led approaches to skill acquisition, and a foundational cornerstone in the Routledge Studies in Constraints-Based Methodologies in Sport series, this is a vital pedagogical resource for students and practising sports coaches, physical education teachers and sport scientists alike.
Visa hela texten

Ian Renshaw is an Associate Professor in the School of Exercise and Nutrition Sciences at Queensland University of Technology, Brisbane, Australia. Ian has worked in the higher education sector since 1990 delivering courses to undergraduate students and supervising postgraduate students in the UK, New Zealand and Australia. Ian has collaborated with Cricket Australia Centre of Excellence, Queensland Academy of Sport, Australian Institute of Sport and was a founder member of the Australasian Skill Acquisition Research Group. Keith Davids is Professor of Motor Learning at the Centre for Sports Engineering Research, Sheffield Hallam University, UK. He has held professorial positions in the UK, New Zealand, Australia and Finland (Finnish Distinguished Professor 2012-2016). He has conducted research on elite and developmental sport programmes at the New Zealand South Island Academy, the Queensland Academy of Sport, Australian Institute of Sport, Diving Australia, Cricket Australia and the English Institute of Sport. Daniel Newcombe is a Senior Lecturer in Sport, Coaching and PE in the department of Sport, Health Sciences and Social Work at Oxford Brookes University, UK. Daniel has worked in higher education for ten years and has been delivering Coaching: Practice to Theory modules to undergraduate students. Daniel is also an international and domestic national league hockey coach. He has been the assistant coach for the Men's Welsh National Team for the past seven years. Will Roberts is a Senior Lecturer in Sport and Exercise Science in the School for Sport and Exercise, University of Gloucestershire, UK. Will has worked in higher education for the last 15 years and held academic teaching positions for over a decade in elite sport environments, establishing his work as a multi-disciplinarian in sport coaching research. Will developed the undergraduate and postgraduate research programmes in coaching at Oxford Brookes University, where he holds a post as visiting researcher in the Centre for Movement, Occupational and Rehabilitation Sciences (MOReS).